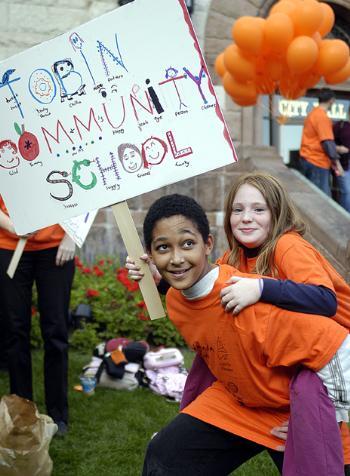 Students and staff members mostly from Cambridge elementary schools gathered for about two hours to praise the city’s afterschool initiatives and to urge continued national support for student activities.

At least 300 people from over a dozen afterschool programs turned out for the event, according to Susan Richards Scott, out-of-school time coordinator at Agenda for Children, a branch of the city government.

The rally was part of the national Lights on Afterschool Day, which was led for the third straight year by California Governor-elect Arnold Schwarzenegger.

“It’s a matter of making sure that the funding continues,” said Witt Potenta, head teacher of the Morse Afterschool program.

Students at the rally said their afterschool activities were both educational and “fun.”

They described studying rockets, learning to play chess and reading and writing stories after their classes are over.

Participants in the rally celebrated their programs by singing “We need, we need afterschool” to the tune of “We will, we will rock you” and rhythmically chanting slogans like “I’ll keep my h-e-a-d u-p and never g-i-v-e u-p”.”

Dante Mannigan, who works in the West Cambridge Youth Center, led the crowd in the call-and-response cheers, with Cambridge politicians, including Mayor Michael A. Sullivan, joining in.

In their short speeches, Sullivan, Scott and a few other administrators lauded the city departments and Cambridge foundations that sponsor the programs.

“Susan and I last year for this event were in Boston and we walked away and said, ‘They’ve got nothing [on] us,’” Sullivan said. “This is the place to be.”

The highlight of the ceremony was a dance performance by students in the Jamnastics program.

Performing to music broadcast by seventh grade deejay David Saint Germaine on the walkway in front of City Hall, Jasmine Lee showed off the results of her four hours of weekly practice.

Third-grader Lisa Delacey said that she has been perfecting her dance for two years in Jamnastics.

Elementary school students from King Open Extended Day proudly showed off a hand-made sign with the name of their program conscientiously written in a rainbow of marker colors.

Olivia Scott, who attends King, said she loves her afterschool program—and the lawn in front of City Hall.

Scott demonstrated her rolling skills, scampering down the short incline.