A Look Behind The Scenes of ‘Hardball’ at Harvard 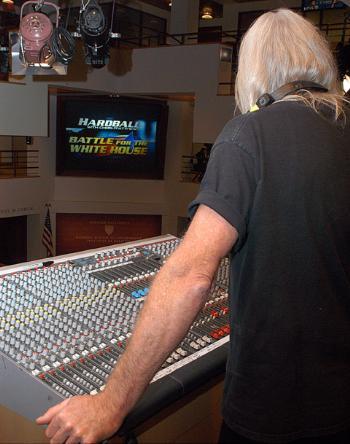 Broadcasting live from Harvard was no easy task for television workers. Left to right, an NBC employee readies for the “Hardball taping, the mobile production truck awaits the taping and a member of the sound crew prepares to go live.
By Jessica R. Rubin-wills, Crimson Staff Writer

NBC satellite trucks camped out behind the Kennedy School of Government (KSG) yesterday and members of the Harvard College Democrats confirmed logistics on walkie-talkies as the campus prepared for the first in a series of visits by the Democratic presidential candidates.

Sen. John Edwards, D-N.C., came to Harvard with his wife and daughter to appear live on MSNBC’s “Hardball” and meet with students in a more informal gathering at Kirkland House. (Please see related story, above.)

Edwards is the first presidential hopeful to travel to Cambridge as part of the show’s weekly “Battle for the White House” series, hosted by Chris Matthews and filmed live at the KSG’s Institute of Politics (IOP).

The candidates will also visit Kirkland House to take part in a speaker series organized by House officials and the Harvard College Democrats, popularly known as the Dems.

Sen. John F. Kerry, D-Mass., is slated to visit next Monday, and several other candidates are lined up for future weeks.

Edwards’ visit represented a trial run of sorts for the MSNBC crew and the Dems, who both spent yesterday afternoon dealing with last-minute logistics ranging from security, to the placement of signs, to the color of the mugs on the Hardball set.

Dressed in suits, the Dems gathered at about 2 p.m. yesterday in the Kirkland House courtyard for a run-through of the evening’s events.

Brooks Washington ’06, the Dems member overseeing the “external” logistics of the senator’s arrival, told the team that Edwards’ wife Elizabeth and daughter Catharine, a student at Princeton, were expected to arrive in about two hours. Edwards himself was scheduled to arrive by the time the event started at 5 p.m.—“not late,” Washington promised.

Holding a roll of yellow “caution” tape, Washington explained that volunteers in the courtyard would walk with Edwards to the dining hall entrance and

From there Edwards would wait with his family in the “holding area”—otherwise known as the Senior Common Room—before the event began in the Junior Common Room.

About an hour after the run-through, as organizers awaited the arrival of the senator’s family, Dems president R. Gerard McGeary ’04 told the assembled group of about a dozen student volunteers, “It’s all about gearing up for ’04.”

Joseph M. Hanzich ’06, speaker director, who was one of the coordinators of the event, said the team met for about three hours a night for the past week to hammer out all the details—ranging from clearing the parking area in front, to providing an Internet connection in the holding area, to figuring out how the senator would cross JFK Street to attend the Hardball broadcast at the IOP.

“From the second that John Edwards stepped out of his car to the second we handed him over to the IOP, we had to have every minute planned down,” Hanzich said.

He said proudly that when members of Edwards’ campaign team met with the Dems last week, they didn’t have to alter any aspect of their plan.

“Even after they’d committed to coming, if we didn’t have our act together we’d still be in danger of having our event not come through,” Hanzich said.

Brittani S. Head ’06, of Students for Edwards, credits the Dems for organizing the event, but says her group worked on encouraging Edwards’ supporters to come.

She said the group has about 25 members now but expects to recruit more after his visit.

“It’s a great opportunity that all these candidates are coming, regardless of who your candidate is,” she says

Hanzich says Kirkland House Masters Tom and Verena Conley were very supportive of the event, and provided the walkie-talkies that the Dems used to coordinate their activities.

The “Conversations with Candidates” speaker series is an outgrowth of other events that have taken place at Kirkland over the past several years.

Peter Emerson, in his second year as a residential scholar in the House, has helped to attract speakers including Glenn Close and Gary Hart.

Emerson lived with Matthews when both worked on a congressional campaign in the 1970s. When the Hardball host planned to bring his show to Harvard, Emerson says he worked with the Dems to plan the candidates’ visits to Kirkland in conjunction with the television show.

“Peter, who has organized campaigns, had the idea of getting all the Democratic candidates to come from across the street, where they have official functions, to talk to students,” Tom Conley says.

Since last spring, Emerson and the Conleys have been meeting to plan this year’s events.

Sloan J. Eddleston ’04 and Adam Kalamachi ’05, chairs of the Kirkland House speaker series, served as liaisons between the House and the Dems and say they spent 10-15 hours in meetings over the past several weeks.

“It’s great for students who want to get involved and who are interested in politics to have some experience...and a taste of what’s to come later,” Verena Conley says.

Meanwhile, across the street, the IOP’s John F. Kennedy Jr. Forum was turned into a television studio yesterday afternoon as about 20 members of the MSNBC production team checked lighting and sound and readied their cameras for the live broadcast.

“I am surrounded by a chorus of intelligence,” Matthews quipped as director Max Schindler checked camera angles.

Schindler sat in the production truck behind the KSG along with lighting directors and producers who watched the broadcast on monitors and relayed comments to Matthews and other production staff.

Production manager Rick Jefferson described the truck as a “control room on wheels.”

The cameras in the IOP were connected to the production truck, which then sent the footage to the neighboring satellite truck that broadcast the signal.

After answering Holt’s questions about the campaign, Matthews stepped down and headed off to prepare for the episode.

“It’s a way of coming to the students,” the host said of his appearances at Harvard. “It’s about engagement.”

When asked how the series ended up being at Harvard, Matthews added, “Harvard’s always hot.”

IOP Director Dan Glickman said that Matthews contacted him more than a year ago with the idea of hosting the candidates at the IOP, and he thought it fit well with the Institute’s mission.

“Our job is to inspire young people into politics and public service,” Glickman said. “The...height of political participation is a presidential election.”

Schindler, who has directed all of Hardball’s College Tours, said the IOP is an ideal location.

“I love the spirit here. I love the layout of the Forum,” Schindler said. “It feels like a forum.... The focus here is on politics.”

Jefferson adds that the venue already had much of the necessary technical equipment in place, including monitors and lights.

“We didn’t have to recreate television as we do in a lot of places,” Jefferson said.

About six students served as interns for MSNBC, Schindler said, performing duties ranging from research to lighting to getting coffee for crew members.

Elizabeth A. Goldschmidt ’06 helped to coordinate undergraduate involvement in the event as the IOP’s Forum Committee Chair.

She said she thinks many student Democrats have not yet made up their minds about which candidate to support.

“This is a good way to decide,” she said. “You get to see them up close. If you have a specific question, you get to ask your question.”