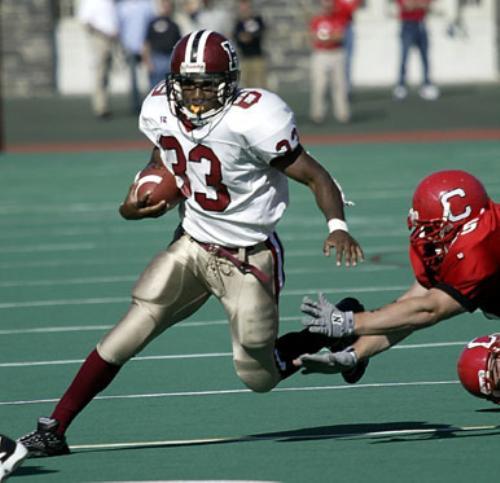 Freshman running back Clifton Dawson ran for 71 yards on Saturday, carrying the bulk of the load due to sophomore Ryan Tyler’s injury. His carries on the Crimson’s second possession set up the go-ahead score.
By Lande A. Spottswood, Special to the Crimson

The pass rush was even more impressive considering that the Cornell offense is based on throwing quick passes—mostly three-step drops and screens—and the ground game, leaving teams few opportunities to get to Razzano.

But on Saturday, once Harvard strolled to a 20-0 halftime lead, the Big Red had to throw downfield at least occasionally in the second half. And the Crimson defense was ready to rush in long-yardage situations.

On the first drive of the third quarter, Cornell faced second-and-15 from its own 36. Razzano dropped back and looked downfield, but before he could throw a trio of defenders converged on the pocket, led by Everett who sacked Razzano for an eight-yard loss. The play and a subsequent delay of game penalty set up a third-and-28 that Cornell could not convert.

Then, with six minutes remaining in the game, Cornell put together its most impressive drive of the game to march to Harvard’s eight-yard line. But after stalling, the Big Red faced fourth-and-goal. With the shutout on the line, the Crimson secondary blanketed Cornell’s receivers long enough for sophomore defensive end Erik Grimm to break through the line and blast Razzano, picking up an 11-yard sack to preserve the shutout.

“It seemed like with our backs against the wall, we always stepped up,” Harvard linebacker Dante Balestracci said.

Harvard remains on pace to break its single-season record of 49 sacks, set in 1990.

The Crimson offensive line continued to play well despite a serious lack of depth on Saturday.

Along with the continued absence of junior center Andy Smith (sprained MCL) and junior tackle Mike Frey (broken tibia), the Crimson entered the game without backup tackle Max McKibben (sprained MCL). Then senior tackle Joe Mujalli, who has been playing in pain with a sprained knee, left the game in the first half.

“Our offensive line is really beat up,” Harvard coach Tim Murphy said. “We lost four of our top five offensive tackles in the last week and a half.”

This left junior walk-on Jon Bechdol—making his first career start—and junior Brian Lapham, playing with a cast on his broken hand, to shoulder extensive playing time. Also, senior James Bakken had to play out of position, moving to tackle from guard to make room for Bechdol.

Still, the group played solidly, helping the Crimson rush for 210 yards on 4.8 yards per carry while allowing only two sacks.

“I thought that those guys, under the circumstances, did a good job,” Murphy said.

With two regular starters battling injuries, a pair of freshmen—tailback Clifton Dawson and cornerback Danny Tanner—stepped in and stepped up.

Sophomore tailback Ryan Tyler was used sparingly due to bruised ribs suffered in last week’s 28-20 win over Northeastern, leaving Dawson to carry the load. Receiving the large majority of the carries, Dawson finished with 71 yards, just over four yards per carry.

“We were going to try to use [Tyler] as little as possible,” Murphy said. “That’s why Clifton got most of the carries, and he played very well. He ran hard.”

Tyler finished the game with 17 yards on only four carries, while catching two passes for 25 yards.

Meanwhile, when junior cornerback Gary Sonkur left the game with a high ankle sprain early in the second quarter, Tanner came into replace him, playing most of the second half.

The 5’10” true freshman from Cheasapeake, Va. was the third freshman—along with Dawson and wide receiver Corey Mazza—to see significant playing time this season.

For his part, Mazza posted the longest catch of the day, a 64-yard TD catch that gave Harvard its only score of the second half.