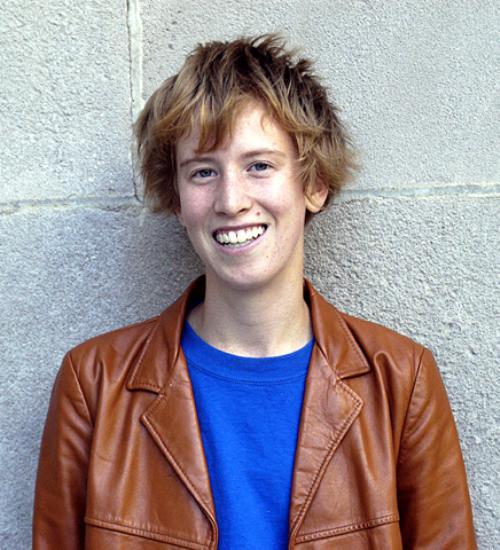 A former winner of the Philadelphia and National Young Playwrights Competition, McCarthy is an underground talent at Harvard who is quickly gaining the respect of her peers. Last spring she directed “Day Standing on its Head” in the Adams Pool Theater, and she will hold a reading next month. When not being sidelined for the Crimson, find her leading FOP or dancing with the Harvard-Radcliffe Dance Company.

I’m working on a play right now not based on, but from the myth of Atalanta, who was the Greek chick who wouldn’t marry anyone who couldn’t beat her in a footrace. I’m going to do a reading in November sometime.

How is Harvard as a community for writers?

Shitty. I think people are pretty constipated and ungiving. No one’s willing to take risks or talk like they’re not in section. Enthusiasm is seen as naive and unsophisticated. I don’t particularly feel part of a community, and if there is a group of writers, I think they (we?) let Harvard the institution dictate what we do and how we act too much. I feel uneasy about that we.

If you weren’t at Harvard, where would you be?

How would you describe yourself in two words?

Where do you imagine yourself in ten years?

Poor? I guess everyone says that. I don’t know. At some job I feel ambivalent about? Living with my parents again? Hopefully not.

What moment would you like to relive from the past year?

Nothing comes to mind.

What has been your most fulfilling class taken at Harvard?

Fall of my freshman year, I was in Dr. Long’s seminar on “Literature of the American South,” and the chemistry in the class was so hot and everyone came in every week with tons of ideas that they babbled everywhere, and not knowing how lucky we were made it better.

Liz Thornberry ’03 says I bob my head rapidly when I’m really in to what someone’s saying.

Which writer or poet do you admire most?

What’s your favorite locale on campus?