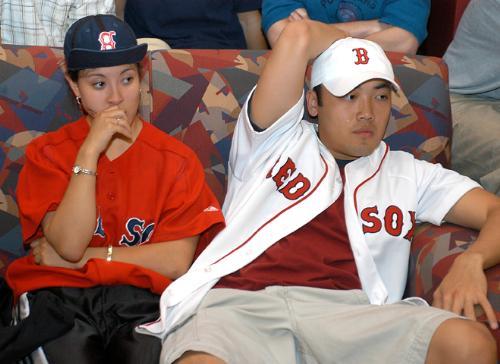 Despair settles over the Quincy House Junior Common Room as LESLEY M. CHIN ’04 and JAMES LI ’05 see the Red Sox fall to the Yankees in a tense, extra-innings close to the American League championship series.
By Peter Zuckerman, Contributing Writer

“I can’t watch this anymore,” Georgie L. Konesky ’07 lamented as she left the Straus Common Room before Aaron Boone got up to the plate.

Moments later Boone belted a shot over the left field fence, ending a roller coaster game that left the Curse of the Bambino intact and much of the Harvard student body dejected and stunned.

The cries coming from the Red Sox faithful at 12:40 a.m. were among the only sounds on a somber campus. There were no parades through the Square, or triumphant toasts atop John Harvard.

Stefan P. Jackiw ’07 of Boston summed up the feelings of a grieving fandom. “This sucks,” Jackiw said.

The four-and-a-half-hour marathon, which drew the attention of both baseball fans and those just looking for a party, tested the willingness of Harvard students to forego sleep and work on a Thursday night during midterm season.

When Game 7 of the American League Championship Series began at 8:18 p.m. Eastern Time, Harvard common rooms across campus were filled with students, snacks and, in some cases, beer.

From House to House, room to room, the crowds were dominated by Red Sox faithful and otherwise ambivalent students who wanted the Curse to come to an end.

John W. Hastrup ’06 watched the game on Dunster House’s new big-screen TV. “I’ve sort of joined the Red Sox bandwagon,” Hastrup said. “It’s a lot of fun having the Sox here [in the playoffs] being in Boston.”

Hillary A. Moberly ’04, a Wyoming native, echoed Hastrup while attempting to finish her reading for Anthropology 138, “The Behavioral Biology of Women.” “I’m rooting for the Red Sox because they’re the home team now,” she said.

Although outnumbered, Harvard’s Yankees fans in many cases were not afraid to express their opinions about the outcome of the series.

After the Red Sox quickly put three runs on the board, Parris just shook his head. “We got time. We got time,” he said, staring at an already overdue Physics problem set. “If they do lose, I’ll cry myself to sleep.”

A little more than two hours later, the screams of joy that were emanating from Red Sox supporters throughout common rooms had morphed into expletive-laden tirades, aimed at the Yankees and life as a Sox fan in general.

The transformation began around the seventh inning. Konesky, who proved to be a bellwether during the 11-inning epic, got increasingly worried as Pedro’s pitch count rose well over 100. “Take him out,” she screamed, taking herself out of Straus Common Room after the Yankees tied the score 5-5 in the eighth.

Konesky had hoped to depart Straus for Kenmore Square; she soon aborted those plans, heading for the shower instead.

By the time she returned, the anxiety in Straus Common Room had reached new levels.

Facing a midterm today, Paul B. Davis ’07 put his Western civilization textbook aside to stare fixedly at the television. Others bit their nails, closed their eyes, or just talked to the monitor that would soon reveal the fate of the Sox.

After leaving Straus to perform with the Krokodiloes before the game reached extra innings, David A. Eisenberg ’07, still clad in a tuxedo, arrived just in time to see his beloved Yankees end the series.

Before announcer Joe Buck could even describe the troubles at the plate that Boone was having against the Red Sox, Eisenberg was screaming as he and other Yankee fans slapped hands.