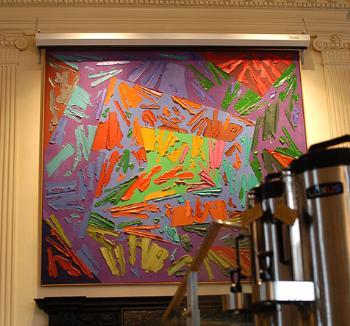 In the Eye of the Beholder

Harvard’s forays into modern architecture are well known for their disastrous results, from Mather to the new One Western Avenue
By Véronique E. Hyland

Harvard’s forays into modern architecture are well known for their disastrous results, from Mather to the new One Western Avenue building. But bad taste is equally evident in the selection of contemporary art around campus, from the notorious Quincy House murals to the gallery of eyesores in the Science Center. FM takes you on a tour.

Sometime in the 1940s, while watching his young son frolic on the beach, the artist Constantino Nivola came up with an idea he thought was brilliant: painting on sand. The art world would not be forever changed, but institutional buildings everywhere would come to know the scourge that is The Ugly Mural.

Quincy residents have to deal daily with two of Nivola’s celebrated works: “Mural in the Main Lobby,” surprisingly located in the house’s main lobby, and “Dining Hall Graffito.”

Quincy House master Jayne Loader says in an e-mail that the artwork sparked “angry reactions to the mural by alumni back in the day.” The 1969 pamphlet “Quincy House, Its Art and Architecture,” corroborates: “Extremely controversial, the graffito has been described by irate alumni as ‘fingerpainting’ or ‘insane doodling.’”

Opponents of the graffito will be happy to learn that curtains are available to cover it.

Head Tutor of Visual and Environmental Studies and painting professor Paul Stopforth marvels at “the fact that people continue to have some kind of dialogue around the [Quincy mural], that it arouses such passions.” He offers another example of much-reviled art, that of Henry Moore, the sculptor whose nude is displayed outside Lamont Library.

Stopforth tactfully admits that Moore’s “star has been somewhat eclipsed.” Maybe, he says, some of the art is “viewed differently because the artists who made the work have fallen out of favor.”

Perhaps the single worst piece of art on campus, period, can be found in the Leverett House dining hall. “Coltrane,” a 1990 eruption on canvas, hangs in a place of honor above the room’s fireplace. Inspired by the music of John Coltrane, who may or may not have spent all of 1990 turning in his grave, the painting’s artist Jerald Webster included an arrow on its back (to indicate which way is up). A few years ago, a group of HoCo members, assisted by some tutors, turned “Coltrane” upside down. Their crime went unpunished until the previous master, the owner of an art gallery, walked into the dining hall one day and restored it to its proper position.

When current Leverett Master Howard Georgi had “Coltrane” appraised several years ago, the results were supremely unsurprising. “Webster’s work may be termed Neo-Geo or Neo-Abstract and falls under the heading of Post-Modern, which is to say art since 1980,” says the report from Eppraisals.com. “Because Webster is a contemporary artist who currently has no history at auction, fair market values for his work will be low.”

The Harvard population is in accordance with the anonymous E-praiser, although it is less diplomatic. When asked about “Coltrane,” Professor Stopforth sputters, “That huge exploding painting?”

Few artists have been inspired by microorganisms, but Bruce Carter and Arthur J. Olson find beauty even in the smallest streptococcus. Their 1978 “Variations on a Virus—Blue” was a generous donation of the artists to the Fairchild biochemistry building. Whether this is to the University’s gain is debatable.

For those unwilling to make the pilgrimage out, “Variations” is a white and gray virus-like structure against a startling blue background, in a simple wood frame. It may well hold the distinction of most pretentiously titled piece of bad science-related abstract art.

The Science Center, which might be called the mecca of bad art, is also graced by Nivola’s sand art. “Untitled” is a travesty in yellow, red, green and sea-green. A strangely disproportionate owl standing on a red box, a scary clown face and a green and white striped alien are only some of the many characters the mural depicts. You can find it on the long wall to the left of Science Center A. The artist Aviva Green’s meditations on puke (actually the paintings “Soft” and “Landing,” both 1980) hang on the next wall.

Erected in 1936 to commemorate Harvard’s tercentenary, this phallic statue sits between Widener Library and Bolyston Hall. Once the green tarp is removed this spring (Harvard always uses protection), the Asian obelisk will continue to watch over the yard.