Class of ’73 Returns in Full Force 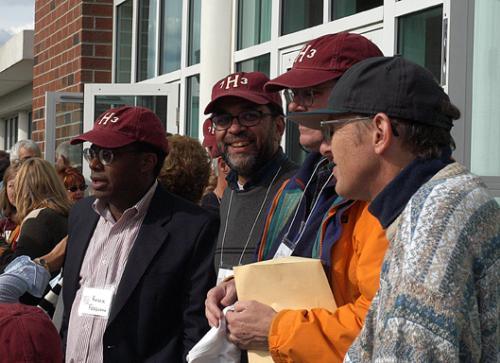 Former Pakistani Prime Minister Benazir P. Bhutto ’73 was just one of the distinguished speakers featured at the 30th reunion of the Class of 1973 this weekend.

The event, which was organized by the Class of 1973 and the Harvard Alumni Association, brought back 257 graduates out of a class of 1,600—120 more than attended the reunion five years ago.

“Coming back on a day like this is different than any other day. The thing that surprised me today is the consistency of people you haven’t spoken to in 30 years, and that you can locate them with great familiarity,” said Janna E. Malamud Smith ’73, who is now a psychologist and author. “It pulls you back into your own past and theirs.”

Bhutto and Washington Post columnists E. J. Dionne ’73 and William Kristol ’73 gave their perspectives on the impact of post-Sept. 11 events around the world.

Bhutto specifically focused on relations between the U.S. and the Muslim world in the wake of Sept. 11.

The Class of 1973, which reunion committee co-chair Marion M.E. Dry ’73 described as a “very politically active group of students,” were themselves no stranger to political turmoil during their time at the College.

When students took over University Hall in the spring of 1969, it was their class—then first-years—who were locked down in the Yard and later witnessed the violent expulsion of the demonstrators by police the next morning.

In addition to Bhutto, class authors such as Smith and Columbia Professor Andrew H. Delbanco ’73 held literary readings and discussions at this weekend’s reunion, and other symposiums addressed modern student life at Harvard, cross-cultural experiences and life transitions.

For some, the reunion provided a chance to learn about classmates that they did not have the chance to meet during their years at the College.

“The truth is, with most of these people, I never really knew them then,” Ira M. Gessel ’73 said. “It’s kind of nice talking to people, to see what they’re doing with their lives, even though they’re strangers.”

“It’s interesting to see how our classmates became world famous people, and to say, ‘Hey, I went to school with that person,’” he added.

But opportunities to socialize with classmates went beyond the daily slate of events. Nightly parties were organized on Friday and Saturday, and the latter evening featured “Sundance,” a student band from the class’ College years reorganized for the occasion by former band member and jazz guitarist Jerome E. Harris ’73.

“We love to party. Partying is a big element of this and it’s an important thing,” co-chair Dry said. “It’s great there’s a sense of nostalgia. I’m finding it incredible being out of school for 30 years because we don’t think we’re that old. Harvard seems very familiar.” Walking through the familiar brick-paved streets of Harvard Square while donning their “7 H 3” hats, many reminisced about the Square of yesteryear, especially the now-gone hamburger joints and popular hangouts Elsie’s and Tastee’s.

“I miss the shabbiness of the Square…No more Elsie’s and Tastee’s, two places where I squandered a lot of hours,” Delbanco said.

Another major change at Harvard since the class left Cambridge manifested itself during yesterday’s class picture. One photo was taken with the combined graduates of Harvard-Radcliffe, and another with only Radcliffe’s female alums.

The attendees also took the time to remember more solemn changes—memorializing the 40 deceased members of their class in a service Saturday afternoon at The Memorial Church.

The reunion concluded with a brunch at the Weld Boathouse yesterday, where the alums gathered to watch the Head of the Charles Regatta.