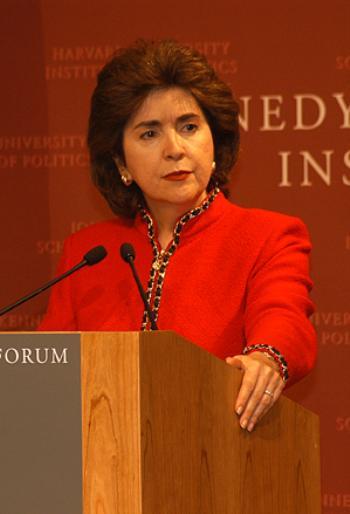 The first female governor of Puerto Rico described her efforts to overcome many years of corrupt leadership and return clean government to the commonwealth in a speech at Harvard last Friday.

Sila M. Calderón explained her reasons for seeking greater autonomy from the United States—a major contrast to former governor Pedro Rossello, who lobbied to make Puerto Rico the 51st state during his time in office.

“The people cherish their U.S. citizenship, and the benefits of a relationship with the U.S. speak for themselves,” Calderón told an audience at the John F. Kennedy Jr. Forum. “But fiscal autonomy and self-government allow for an extension of our industrial development.”

Calderón also noted that the commonwealth status of Puerto Rico allowed for a distinct cultural background and language, while still incorporating citizenship and shared common values.

She noted that corrupt leadership over the past 50 years led to a large loss of the Puerto Rican government’s founding principles of “honesty, compassion, responsibility and respect.” But the corrupted class of former leaders have been exposed, tried and jailed, she said.

This corruption and dishonesty among leaders disheartened the public, according to Calderón.

“I fear that the children of Puerto Rico were becoming burdened with a jaded but justified contempt for public service,” she said.

As a result, Calderón said she set out to rescue the core values lost by the government, implementing audits of all public agencies and standing ready to take immediate action over the slightest hint of misuse of public funds.

“I was determined to give people the clean government they wanted and deserved,” she said.

And now, she added, teachers are being trained in ethical education and are required to incorporate ethics into daily lessons.

“Ethical seeds will grow into lasting values,” Calderón said with a smile.

In November 2000, when Calderón was elected, health care costs were spiraling up and economic development had been sitting on the back burner with over 30,000 jobs lost in previous years.

The new governor came to power and brought with her a 12-point economic development plan, which brought down health care costs and created over 80,000 new jobs.

In keeping with her campaigning platform and slogan of “We want change,” Calderón said that she allocated over $1 billion to improve living conditions for residents.

Though she said great strides have been made over the last three years, Calderón stressed that it has not been easy.

“It’s been a long and difficult journey,” she said, “but I’m proud to say we’ve been bringing compassion and values back to the government.”

Answering questions from the audience after her speech, Calderón acknowledged her decision not to run for re-election, saying she never saw herself as a politician. But she added that she hoped to continue public service in new ways.

Before her speech, S. Allen Counter, director of the Harvard Foundation for Intercultural and Race Relations, presented Calderón with an award from the foundation honoring her humanitarian achievements and constant quest to help those in need.

Calderón has a well-established political history in Puerto Rico. She was the first female chief of staff for the governor and was appointed secretary of state two years after that.

In 1995, Calderón was elected mayor of San Juan, Puerto Rico’s largest city, and her name has been prominent in the U.S. due to her strong efforts to stop the Navy’s bombing of Vieques, a Puerto Rican Island.

Calderón’s visit to Harvard was highlighted by a luncheon in her honor in the Leverett House dining hall, which preceded her speech at the forum.

Also present at the speech were several Puerto Rican officials and friends who supported the governor throughout her election, including the president of the University of Puerto Rico.