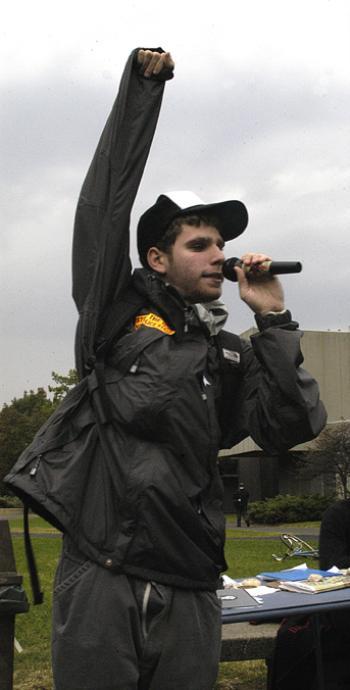 MICHAEL A. GOULD-WARTOFSKY ’07 protests the U.S. presence in Iraq outside the Science Center yesterday.
By Andrew S. Chang, Contributing Writer

Sixty students gathered outside the Science Center yesterday to partake in a dual-purpose rally in protest of the Patriot Act and the U.S. occupation of Iraq.

Amid the intermittent rain, the crowd chanted “Promise, promise liberation, all we see is occupation!”

The “End the Occupation” rally was hosted by the Harvard Initiative for Peace and Justice (HIPJ), the Socialist Alternative and the Campaign for Campus Liberty.

Michael A. Gould-Wartofsky ’07 and Oludamini D. Ogunnaike ’07, members of the Campaign for Campus Liberty, said they saw a link between protesting the occupation and protesting the Patriot Act.

The pair protested in song, with Gould-Wartofsky rapping “Drop beats, not bombs” to the rhythm of Ogunnaike’s drum.

Mahoney said her brother is currently in Iraq. She contested the protesters’ claim that Iraqis want soldiers to leave the country, and argued instead that the U.S. military is acting as a stabilizing force.

Elaine C. Hagopian, professor emerita of sociology at Simmons College, told the assembled protesters that the U.S. is using the Sept. 11, 2001 terrorist attacks as an excuse to enact a foreign policy she characterized as seeking a “New World Empire.”

She also described the war as a “nightmare” for soldiers abroad.

Aimee Smith, a Cambridge City Council candidate running on the Green-Rainbow Party ticket, spoke at the rally in favor of creating a Patriot Act-free zone.

In September, the city council passed a resolution reaffirming Cambridge’s status as “A Sanctuary City” and asking local and federal law enforcement to protect Cantabrigians’ civil rights in enforcement of the Patriot Act.

But Smith said that the council’s order lacked a method of enforcement—something that she hopes to add if elected.

Smith wore a hijab—a scarf many Muslim women wear around their heads—to the rally. According to her campaign literature, she wears the hijab “in solidarity with Muslims targeted by hate crimes and racial profiling.”

The protesters cited a variety of concerns about the U.S. occupation of Iraq and the Patriot Act.

Rachel Bolden-Kramer ’06, a member of the Campaign for Campus Liberty, said that her main concern was the Patriot Act.

“The Patriot Act is especially dangerous for foreign students at Harvard,” she said.

While some protesters said that U.S. forces should immediately leave Iraq, others said they thought the withdrawal should be more gradual.

Ted Virdone, a non-student who described himself as a member of the Socialist Alternative, said he thinks U.S. troops are not solving any of Iraq’s problems and should immediately leave the country.

“Occupation is not in the interest of ordinary people here or in Iraq,” he said. “People like us get killed in occupation. [The war] costs our money, our lives and I don’t get the oil profits that come from it.”

But Aaron K. Tanaka ’04 said he believes the U.S. needs to make plans to leave Iraq.

“As we withdraw we must not siphon away resources from the Iraqi people,” Tanaka said.