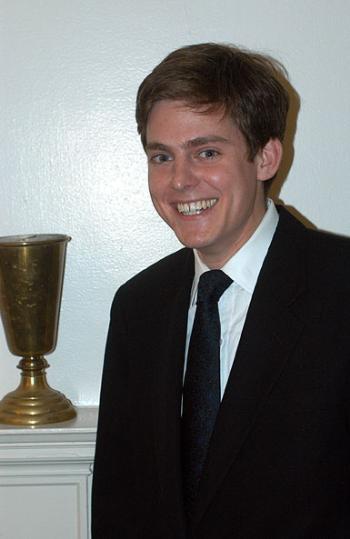 Everyone has horror stories relating to summer jobs—struggling with recalcitrant campers and bug bites, or braving manic customers at the
By V.e. Hyland

Everyone has horror stories relating to summer jobs—struggling with recalcitrant campers and bug bites, or braving manic customers at the local mall. Kurt L. Chauvière ’04 had it a little better in one sense. As he puts it: “The dead don’t complain.”

Chauvière began working at the Seale Funeral Services in the rural town of Denham Springs, La. when he was 16. Chauvière’s grandfather started the company, and his uncle now owns it. “I still visit every time I’m back home, and occasionally pitch in,” says Chauvière. “Nothing was ever normal. It was a strange day if you didn’t have some surreal experience.”

Chauvière is quiet and unassuming in person, dressed in a sober suit and tie, but he enjoys telling a good ghost story. Except his are true. “One time late at night,” he says, “we had to pick up a murder victim who was stabbed with a barbeque fork, stabbed right below the ribs. Apparently he got in a beer-fueled fight at a barbeque.”

With a striking lack of self-consciousness, Chauvière goes over some of the everyday tasks of his position. For one thing, there were the frequent trips to the airport. “So, you know, you have to prepare your corpse for air travel,” he says. “You strap them in a box, embalm them, put in a couple of pillows—it’s just like putting someone to bed.” For shorter distances, Chauvière hits the open road without the nuisance of nagging back-seat drivers—his passengers are among the most subdued around. “I’ve driven it all,” says Chauvière. “We mostly used a white van, but I also drove a hearse and a limousine. I’m a licensed chauffeur,” he says, flashing his Louisiana chauffeur’s license.

Sometimes Chauvière would also pinch-hit as a coroner’s assistant where one of his tasks included weighing organs. He did not hold an embalmer’s license, but was legally allowed to assist with the process so long as there was a licensed embalmer present.

“I’ve put makeup on dead people before,” Chauvière states quietly. The makeup came courtesy of the Dodge Chemical Company right here in Cambridge, which also makes embalmers’ fluid, plastic eyeball covers, and the wires used to keep people’s jaws together. Chauvière admits that funeral makeup doesn’t offer a lot of cosmetic options. “Traditionally, we glue the lips together,” he says, and in terms of lipstick colors, “you pretty much have the options of beige or rose.”

Not all of Chauvière’s his experiences were as amusing as putting make-up on corpses. One time in the remote village of Pine Grove, La., he had to remove a body from a car that had been set on fire. Chauvière and his team, sweltering in their black suits in the 100 degree heat, cut open the sides of the car with an acetylene torch and crawled into the burnt-out truck.

This happened right before lunch. Rather than go to lunch, Chauvière got in his car and drove home. He took off his suit and put it in a grocery bag, took off his shoes and placed them in another bag, took a shower, brought the suit to the dry cleaners’ and just told them to “make it clean.”There were lighter moments as well. Chauvière remembers some of the memorial services as being particularly colorful, like when a 6-year-old composed a memorial rap for his grandmother.

“Everyone asks about Six Feet Under.” He denies that his life is similar to the show. “But there are moments when they’re dealing with bodies that are...frighteningly close to what it’s actually like.”