Some Veritas with Our Vino 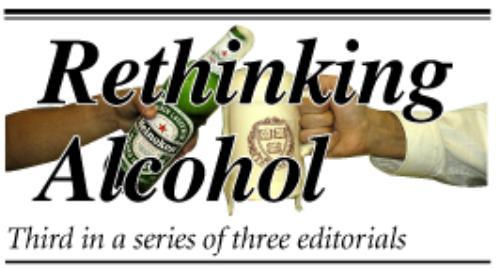 By The CRIMSON Staff

As this weekend provides a brief respite from the rush of midterms and papers, many students will watch their friends in plays, check out the latest flick or catch up on lost sleep. Many of them will also consume alcohol at parties and bars—and some of this drinking will prove dangerously unhealthy. Yesterday, as the Committee to Address Alcohol and Health met for the first time, The Staff called for the College to ignore Massachusetts state law and educate its underage students about responsible drinking. But regardless of whether the University takes such a principled stand, there are many other changes that the committee can propose that would ameliorate problem drinking on campus.

A widespread alcohol education effort would be best realized by a Center for Alcohol, situated at University Health Services (UHS). Staffed with alcohol-knowledgeable health professionals, the center could run—among other projects—educational sessions and regular clinics to curb irresponsible drinking. The center could, for example, offer support sessions for those who suffer from alcohol dependency—no such program currently exists.

One of the center’s most visible efforts would be to sponsor mandatory yard meetings; such meetings could effectively educate first-year students with engaging skits (akin to “Sex Signals”) portraying common situations with alcohol, potent testimonials from those who have witnessed various dangers associated with alcohol abuse, as well as clarifying definitions of binge drinking as applied to familiar situations—like the amount of beer consumed during a Beirut game or hard liquor during a 21st birthday celebration. While such a program is more effective when educators can highlight responsible behavior, even if the college is tied to portrayals of irresponsible drinking, at least part of the message will still get through.

And yet the dangers of alcohol use and abuse don’t only affect first-years. That nearly half of the alcohol patients at UHS are upperclass students illustrates that education and outreach should continue throughout a student’s college career. Targeting students who wish to throw room parties would be a highly effective way to reach older students who are likely to expose themselves and others to alcohol. Currently upperclass students who wish to throw a party must only fill out a short form and speak briefly with their resident tutor. The Center for Alcohol should sponsor training sessions in each House at the beginning of the year that are required for all potential party throwers—detailing ways to improve safety at parties, from the type and quantity of alcohol served to what to do if a student gets sick. Such a policy wouldn’t limit the number of parties that students throw—it would just add another educational opportunity to express the dangers associated with alcohol.

Besides education initiatives, this center could also overhaul the current emergency response system for students sick from alcohol consumption by securing an Emergency Medical Technician (EMT) for UHS. Currently Harvard University Police Department officers escort students who abuse alcohol on campus and need to be taken to UHS. This process not only risks the health of sick students by delaying actual medical response, but since police officers are universal symbols of discipline, it also sends the unintentional message that discipline comes before protecting the health of sick students. In lieu of the current policy, the University should mandate a professional EMT bring sick students to UHS. Even with the added cost, this method is preferable as it encourages more students to seek help and allows responders to have medical capabilities in case students’ conditions worsen during the trip to UHS.

Finally, a Center for Alcohol could clarify disciplinary standards. That some students are currently admonished for being drunk, however leniently, sends a mixed message.

Were the Center for Alcohol to properly educate all students about alcohol use, student transgressions related to alcohol consumption would be solely the responsibility of the student.

The Committee to Address Alcohol and Health will benefit from student involvement in a variety of forms: surveys, letters, open meetings and student committee representatives. Following the example of the Committee to Address Sexual Assault at Harvard, this committee should also allow confidential sessions as a means to generate honest and constructive feedback about alcohol abuse on campus. The committee can also draw on the successes and failures in addressing alcohol that are observed on other college campuses throughout the country.

In any case, as it takes the next few months to recommend solutions, the committee must always make concern for the health of students its paramount responsibility.