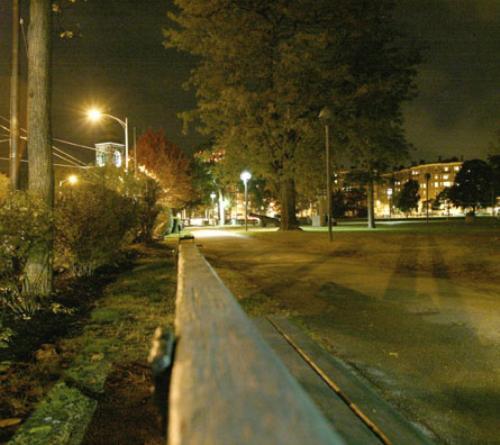 A view of Cambridge Common at night illustrates the park’s empty and dark environment, conditions similar to those three nights ago when a student was assaulted as she was walking through the area.
By Hana R. Alberts, Crimson Staff Writer

In the fourth sexual assault reported near campus in two weeks, an undergraduate was groped by an unidentified man Wednesday evening while she was walking through Cambridge Common, police said yesterday.

The student was attacked at approximately 8:30 p.m. when a male grabbed her wrist and waist, spun her around, grabbed her breast and then attempted to remove her coat, according to a community advisory released yesterday by the Harvard University Police Department (HUPD).

The victim struck the face of the suspect, who returned the blow and fled the area, the advisory said.

The suspect was described in the statement as an 18- to 25-year-old, light-skinned male who is 5’11” with a medium build.

The suspect was reportedly wearing a black or blue puffy coat, a stocking hat and white gloves.

Despite the victim’s affiliation with the University, CPD will handle the investigation since the Cambridge Common area is under its jurisdiction, Catalano said.

CPD spokesperson Frank D. Pasquarello said CPD has not determined if the incident is related to three assaults that occurred within blocks of the Quad last week.

Pasquarello said last week that an unidentified man groped three women—who were not Harvard affiliates—in separate incidents as they walked alone near Huron and Concord Avenues.

Pasquarello said the times of those assaults do not fit a pattern, although one incident last week also occurred around 8:30 p.m. He did not know when the first incident occurred, but said it was sometime on or after Oct. 10.

According to Pasquarello, the suspect in those incidents—described as a 5-foot-10-inch to 6-foot tall white male, age 25 to 35 with short brown hair and weighing 170 to 180 pounds—fled on foot following the encounters.

But he said it is unlikely this most recent assault and the others were committed by the same person.

HUPD is advising students, faculty and staff not to walk alone and to avoid dimly lit and isolated areas.

“Clocks are getting rolled back and it’s going to be getting darker earlier,” Catalano said. “We’re concerned about people going to and from classes and work in the dark, and we encourage people to use the designated pathways.”

He said the walkways illustrated on the HUPD website are well-lit, and there are accessible emergency blue light phones on those routes.

Catalano said that Harvard is not allowed to put blue light phones on Cambridge Common because the property doesn’t belong to Harvard, and HUPD doesn’t have jurisdiction over the area.