Chapel May Remain in Cambridge Permanently 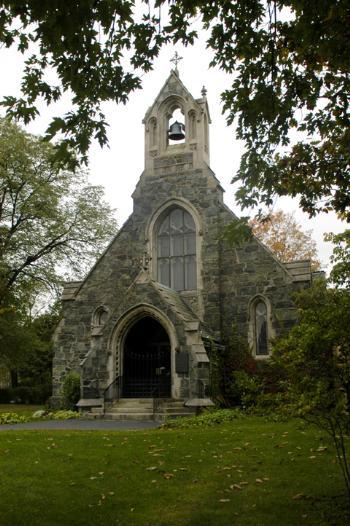 Congregants of the Swedenborg Chapel, located between Annenberg and William James Halls, are fighting for the Chapel to remain in Cambridge.
By Shayak Sarkar, Contributing Writer

After decades of fighting to hang on to a tiny plot of land nestled between Annenberg and William James Halls, the Swedenborg Chapel may finally become a permanent part of Cambridge.

On Nov. 16, the financial umbrella organization for the four active Swedenborgian churches in Massachusetts will vote on whether to underwrite the congregation’s purchase of the property.

Parishioners have been struggling for more than two years to meet the $2 million price tag that the Swedenborg House of Studies, the seminary which currently owns the property, has placed on the land.

The plan currently on the table calls for the umbrella organization—the Massachusetts New Church Union—to purchase 50 percent interest in the church for $2 million. The congregation, known as the Cambridge Society, would co-hold the deed.

According to Reverend Sarah Buteux, the congregation’s the money, intended to perpetuate the faith, will come from the Union’s sale of a bookstore on Newbury Street. That property, purchased in 1986 for $175,000 is now worth $3 million.

“I think the probability of the proposal passing is very good but we can’t predict the future,” said Lars Viberg, a member of the Union and president of the Swedenborg Chapel church council.

The Swedenborg Chapel has a history of struggling to keep its Cambridge location.

In the 1960s, in hopes of raising funds, the seminary tried to sell the chapel property. In a lawsuit that reached the Massachusetts Supreme Judicial Court, the congregation successfully stopped that sale.

But after the House of Studies decided to relocate from Cambridge to Berkeley, Calif. in 1999, the seminary decided once again to try to sell the land, much to the outcry of the churchgoers.

The congregation blocked a plan to convert the chapel into a lobby for an 11-story, 50-unit apartment building. Fearing similar situations in the future, the congregation brought the case to court, demanding that the seminary be permitted to sell the property only to the congregation or to Harvard.

Though the congregation lost that legal battle, the House of Studies struck a deal in March 2001 whereby the Cambridge parishioners would be allowed to buy the church for half of its $4 million value—so long as it could meet a payment deadline of March 31, 2003.

The congregation devised several plans for raising the needed funds, including one proposal whereby the Church would offer local businesses and institutions—including Harvard—the opportunity to endow seats on its board of trustees for $500,000 each. Despite initial interest, Harvard and others ultimately chose not to participate, rendering the plan ineffective.

As the clock ticked down to the March 31 deadline last spring, the church had raised barely an eighth of the necessary sum.

In response to the appeals of the church, the deadline was extended.

Buteux then presented the most recent fundraising proposal—getting to the Union, the independent financial body for the four active Swedenborgian churches in the state, including one in Boston, to underwrite the congregation’s purchase of the land.

That plan will go up for a vote within the Union on Nov. 16.

Average attendance for Sunday services at Swedenborg Chapel is 25, but the small, diverse congregation has fought hard for its faith.

“Too many things have happened with the chapel and this community for this to be an accident,” said Melanie Bunger, a Harvard Divinity School Student. “Every time I come to the chapel it’s like coming home.”

If the current plan is approved, the costs of church maintenance, for which the congregation will be held responsible, may come from tithing, which the reverend practices herself and hopes to spread to Cambridge Swedenborgians.

The Swedenborgian Church is one of the few Christian institutions that performs interfaith weddings. The Cambridge chapel also provides resources for men transitioning out of prison, facilitates near-death experience discussion groups, and hosts non-violent communication work.

“One way to try and convey what is special about the Swedenborgian church is to say that there is a place in heaven for all who live decent and caring lives” says Buteux. “Our service-oriented church complements the diverse, tolerant dynamic of Cambridge, and I would like it to remain that way.”