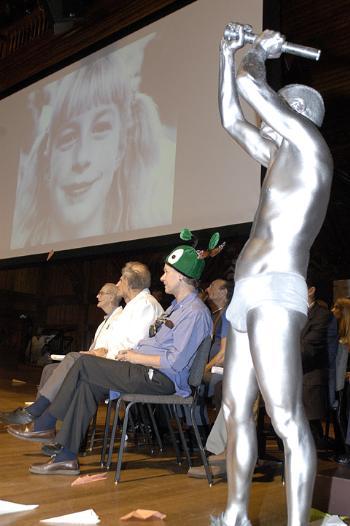 The Ig Nobel awards, held in Sanders Theater last night, celebrated the humorous scientific research of the past year, including the discovery of homosexual necrophilia in Mallard ducks.
By Kimberly A. Kicenuik, Crimson Staff Writer

Under the weighty Latin inscriptions and massive wood rafters of Sanders theatre, more than 1,000 spectators donning everything from tuxedoes to lab coats honored the first man to record homosexual necrophilia in Mallard ducks last night.

Joined by six Nobel Laureates, they also witnessed the authors of an academic paper entitled “Chickens Prefer Beautiful Humans” accept a prize consisting of a plastic box mounted on a cardboard sheet as part of the 13th annual Ig Nobel awards.

As paper airplanes flooded the stage, a man dressed in briefs and silver body paint carried a flashlight on his head.

Meanwhile a trio sang an opera about a scientist’s love affair with an oxygen atom.

Although few would expect such a zany display in this most hallowed of Harvard’s halls, yesterday’s festivities continue the Ig Nobles’ time-honored tradition of recognizing distinguished humorous academic research and scientific discovery.

The events, which will be broadcast on National Public Radio’s “Science Friday” in late November, included song and dance, science demonstrations and a Win-a-Date-with-a-Nobel-Laureate audience raffle, along with the evening’s core awards ceremony honoring 10 teams of researchers from four different continents.

“True to tradition, this year’s Ig achievements speak for themselves—and speak all too eloquently,” said Master of Ceremonies Marc Abrahams, who also serves as editor of the Annals of Improbable Research.

But Abrahams’ speech soon took on a more serious tone—if only for a moment.

“Every prize-winner has done something that first makes people laugh, and then makes them think,” he said.

And then, as they say it must, the show went on.

C. W. Moeliker of the Natuurmuseum Rotterdam in the Netherlands explained the origin of his experimentation with Mallard ducks, pulling out a duck corpse from a brown paper bag to illustrate his point.

“Outside the museum where I work, I saw a duck rape the corpse of another male duck. After an hour, I couldn’t take it anymore. I had to dissect it and figure out what was going on,” Moeliker explained.

The Ig Nobel Prize in Literature was received by John Trinkaus of the Zicklin School in New York City for his collection and analysis of data on the timely and pressing topic of pet peeves.

Trinkaus’s work documented the rate of occurrence of specific annoyances including adolescents who wear backwards baseball caps and shoppers who enter the express check-out line at supermarkets with more than the allotted number of items.

“People always say ‘So many people do that, and it’s so annoying!’ So I thought it would be interesting to calculate more exact statistics on irritating social behaviors,” Trinkaus said.

On behalf of the country of Liechtenstein, Karl Schwärzler accepted the Economics Prize for his unabashed spirit of capitalism. His ground-breaking work has made it possible to rent the entire small European country for corporate conventions, weddings, and bar mitzvahs.

Seven other awards were also presented in such categories as Interdisciplinary Research, Medicine, Psychology and Chemistry.

Paying tribute to the evening’s theme of “Nano,” several prominent scholars explained their fields of research in a series of Nano-Lectures—twenty-four second summaries in scientific jargon followed by a seven word explanation. Topics for the traditional sound-bite soliloquies included slow light, the genome, memory and education.

Ig Nobel winners will have the chance to explain their research at greater length to those interested in free public lectures hosted this Saturday at MIT.

—Staff writer Kimberly A. Kicenuik can be reached at kicenuik@fas. harvard.edu.