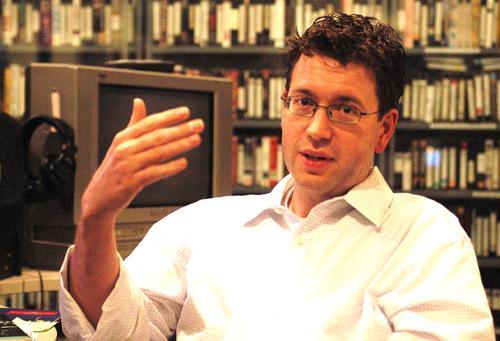 After a stint as moderator of Slate's online forums, J.D. CONNOR '92 has brought his expertise in film theory to Harvard's Visual and Environmental Studies and English departments.
By Scoop A. Wasserstein, Contributing Writer

Though J.D. Connor ’92 attributes his appointment to the Harvard faculty this fall to “dumb luck,” he says he won’t just be able to ride out his new career with good fortune.

“You better make sure that you don’t look lucky after a while, that you look good,” he says.

Connor brings with him an impressive resume. He served as an editor at Microsoft’s online magazine Slate and has written extensively on film theory.

Now, as a new member of the Visual and Environmental Studies (VES) and English departments this year, he’s teaching two film theory courses—English 164c, “Literature and Visuality in America” and VES 195, “Contemporary Hollywood Cinema.” His English course is generating so much buzz that there is talk of it becoming a core class, Connor says.

The classroom is where Connor has been looking to get to for a while. It was during his undergraduate years at Harvard that he says that he settled on teaching as a career.

“It seemed like the right thing to do; it’s what I enjoyed most,” he says. “I had fantastic section and tutorial experiences.”

His experience debating in high school also swayed him toward teaching, he says.

“I was used to speaking in front of audiences.” Connor recalls. “I always liked that.”

After graduating Harvard he entered graduate school at Johns Hopkins, which allowed him to gain some strong teaching experience fairly quickly.

Much of Connor’s work at Johns Hopkins was on an English department project based on a professor’s theory of “the conscious fashioning of the literary image, particularly in Byron.” Soon he started to apply the questions of imaginary identities to movie studios—and realized that he could combine academic studies with his love of film.

When he finished at Johns Hopkins, Connor was contacted by David Plotz ’92, who had been a friend of Connor’s at The Crimson and had become the Washington editor for Slate. Plotz told Connor about a job moderating Slate’s online forum, and Connor accepted.

As the moderator, Connor would collect the most interesting responses to that week’s articles, tying them together with his own commentary elucidating why he chose the selected postings.

His job at Slate continued until May of this year, but during that time, Connor’s work on film theory did not fall by the wayside. He wrote on Braveheart and the Vivendi-Universal merger, among other topics, for such journals as Representations, The Baffier, and MLN.

At Harvard, he says he plans to continue his work in film theory, focusing on “the emblems of the order of composition within individual works” through a new book, whose working title goes New Classics: Media Conglomerates, Impossible Synergies, Downstream Revenues and the Hollywood Studios in the 1990s, or, why Matthew McConaughey Drinks Seagram’s V.O. in U-571.

The emblems that Connor focuses on in his criticism vary depending on the type of film.

Though his popular new English class is clearly a priority, Connor seems more excited about his VES class, at least partly because it focuses on the Hollywood movies that have propelled much of his academic work over the last decade.

“It would be easy, to put together a Hollywood class where you would pick the 12 or 13 movies that fit best with what the VES is already doing with filmmaking and a personal vision,” he says.

But Connor has a different objective in mind for the class: to give his students an appreciation of the intelligence of the Hollywood machine.

As a VES graduate, Connor says, “you don’t have to find yourself leading a life of ‘the man is oppressing me, I can’t get my independent feature made, they’re all stupid.’ They’re not stupid; most of them are their classmates.”

Connor says that the burgeoning DVD revolution—which has led to the digitalization and preservation of movies in a permanent format for the first time ever—makes film criticism particularly exciting, and he hopes to convey that to his students.

Though there are similarities in his life at the head of the class to his experiences as an undergraduate, the contrast between student and teacher is clear from Connor’s description of his new role.

“As a student, I beat a path between Canaday or Dunster and my classes and I spent a ton of time in the library and watching movies. My day started at 11 in the morning and ended at 3 at night and I did a ton of work. As a professor, I have a family and we’re very close, but I do stupid dad things like fall asleep on the couch at 10 o’clock, while reading a book that I’m teaching the next day.”