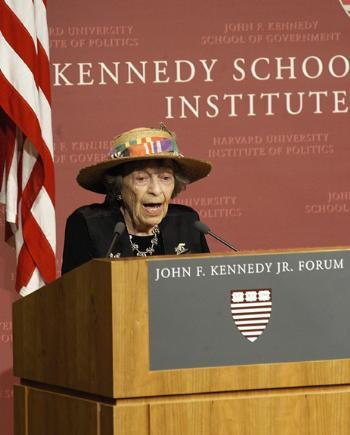 Doris Haddock, better known as “Granny D,” the 93-year-old woman who walked across the country from 1999 to 2000 to advocate campaign finance reform, is on the move again.

Today Haddock is starting a 14-month tour through cities and towns across the United States to encourage greater voter participation. And Harvard is her first stop.

Only slightly taller than the podium she spoke from and wearing a straw hat with a feather stuck in it, Haddock delivered a fiery speech at the John F. Kennedy Jr. Forum last night on the need for more Americans, especially young working women, to vote.

“We, the people, have only been playing with half our team,” she said, alluding to the fact that only around 50 percent of the U.S. voting age population cast ballots in the 2000 national elections. There are roughly 64 million working women in the United States, most of whom are eligible to vote, according to Haddock. But only about half of those women are registered voters.

“It’s not an easy life” to be a working mother, said Haddock, who has worked all her life. That is why she is using her trek in the next 14 months to disseminate voter registration forms to working women.

She plans to return home to Dublin, N.H., in time to vote for the 2004 presidential election.

“Voting is one of life’s essentials,” Haddock said, arguing that America needs a “government that will represent us, not just the rich and powerful.”

“The great masses cannot be left thinking they are powerless under the system,” added Haddock, who walked during her last cross-country tour with a sign around her neck that read “Granny D for campaign finance reform.”

Haddock wore out four sets of shoes during her walk. At one point during the winter, she cross-country skied 100 miles. At the end of her journey, 2,200 people welcomed her in the nation’s capital.

During the last three days of the McCain-Feingold debate in Congress in 2001, she walked around the Capitol building 24 hours a day, stopping for catnaps and food.

She helped to make the previously obscure issue of campaign finance reform popular with the American public.

Haddock’s speech at Harvard kicks off her second journey in the name of a political cause. This is not her first time at the University, though. When she was 17 years old, Haddock worked at Harvard Business School as the blue-uniformed girl checking meal cards for the male students. “I’m glad to be back at Harvard, especially because it’s not at the Harvard Business School,” she quipped, drawing laughter from the audience.

“She’s a nontraditional speaker. Often we have heads of states. As you know we’re bringing presidential candidates,” said Bill White, director of the John F. Kennedy Jr. Forum, which sponsored the event along with the Women and Public Policy Program at the KSG. “It’s our responsibility to bring political activists to the stage, to give students a diversity of perspectives on how to change the world.”

“I think she resonates with a lot of the people at Harvard,” said Eric P. Lesser ’07. “Students want to change things but they don’t know how. Granny D came out and did it.”

Sylvia L. Clute, who is 60 years old and a student in the mid-career program at the KSG, said Haddock was an inspiration. “I look at her and I realize I have at least 30 years to make use” of.

Towards the end of the event, when asked why she feels the need to walk or make a physical tour when there is the media and the Internet, Haddock said there is more value in “meeting face to face. That’s how it used to be done.”

“She’s a very small woman. But she has a very big cause, this little woman who walked across the country,” White said.