Parking Your House Near Harvard Yard 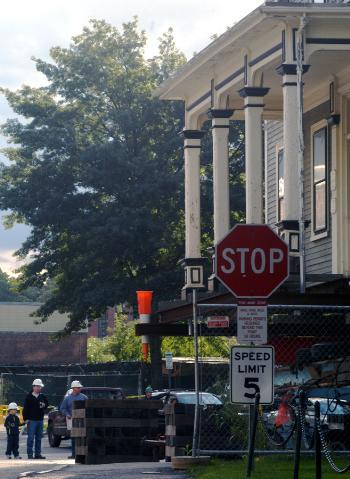 The 162-year-old, 200-ton Palfrey House was hoisted onto a hydraulic system and pulled to its new location on Hammond St. atop a five-story underground parking garage.
By Elena Sorokin, Contributing Writer

After sitting sadly for 11 months in the corner of a Divinity School parking lot, the elegant, 162-year-old Palfrey House was again the center of attention as it rolled to its permanent home on Hammond Street this weekend.

To pave the way for an underground parking lot, the house—built by the first dean of the Divinity School and acquired by Harvard in 1916—was hauled from its original location and stuck behind Conant Hall on Oxford Street.

Once the roof of the underground garage was complete, the time was right to give Palfrey House a real home.

Light rain fell on the crew of 15 construction workers Saturday who maneuvered the 200-ton house with a hydraulic system and giant sets of wheels that resembled aircraft landing gear.

Passers-by, catching a glimpse of a 6,000-square-foot structure inching across the parking lot, stopped and looked on, often at a loss for words.

Taking a break to sip coffee from the back of a pick-up truck, construction workers snapped pictures and one man even whipped out his video camera.

One elderly gentleman in pink trousers who refused to identify himself asked if the building was lost. He seemed pleased to learn that it was actually going home.

“I hope they’re obeying the speed limit,” he commented, as construction workers began a complicated set of turns to parallel-park the Greek revival next to its new foundation.

Palfrey House will be settled on top of a five-story underground parking garage, which is scheduled to be finished at the end of next year.

At 7 a.m., construction workers and professional movers from Northeast Construction Company arrived on the scene. By 8:30, the house had been eased onto a 50-ton hydraulic system and was making its way north to the cranking of pulleys and the sputtering of tractors.

By 1 p.m., the house was preparing to make a sharp left turn that would leave it facing its new neighbors on Hammond Street.

For Eddy N. Couturier, who founded Northeast Building Movers in 1983, this was a typical day’s work.

Couturier has moved between 1,000 and 1,500 buildings over the course of his career. A recent job involved raising a 400-ton brick building up one floor to make room for a ground-level shopping center.

Couturier, clad in jeans, workboots, and a white hardhat, could be seen underneath Palfrey House directing his team, which skillfully engineered each turn.

Site manager Steve Masiello, who stepped back to survey the house as it inched across the parking lot, said this job was relatively simple, as the house was in good repair. Only its chimney needed to be supported during the move.

Guiding the house down a massive ramp which dropped five feet was a more serious concern.

Residents watched the show unfold with a mixture of suspense and satisfaction.

Richard Silver, who has lived on Hammond Street for 25 years, said he is pleased that Palfrey House is finally settling down.

He anticipates a return to normal life, without the “noise, dust and construction” of the underground parking garage that has made his house vibrate off-and-on for over a year.

Lea Professor of Medieval History Thomas N. Bisson and his wife Carroll Bisson, a Lamont librarian, viewed Palfrey House from behind a metal fence. The couple has lived opposite the house for the last 17 years.

The Bissons said they were glad to see that it would remain a part of historic Cambridge.

Sean G. Palfrey Sr. and his wife Judith Palfrey, co-masters of Adams House, were offered a closer look at the move because Sean Palfrey’s great-great-grandfather built the house in 1831 as part of his 12-acre Hazlewood Estate. John G. Palfrey II was the first dean of Harvard Divinity School as well as a historian, U.S. Representative and influential abolitionist.

“I’d like to see Palfrey House a part of the community, with the streets that are a part of the family,” said Palfrey, whose birth name is in fact John Palfrey VI, noting that Hammond (the street to which the house was moved) was his great-great grandmother’s maiden name.

According to Alex Speier, a University spokesperson, Palfrey House will be restored and renovated for use by the Faculty of Arts and Sciences in conjunction with the Cambridge Historical Commission.

Palfrey joked that he’d like to see the refurbished building annexed to Adams House.