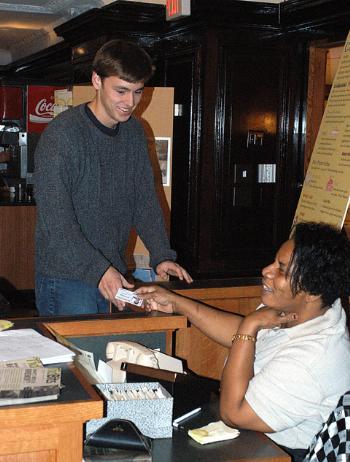 According to Rosen, Winthrop dining hall will be closed to students who are not residents of the House on Tuesdays and Thursdays during dinner, which runs from 5 to 7:15 p.m.

Winthrop residents will be allowed to bring one guest each on the restricted days.

Rosen did not say when the restrictions will take effect. As of yesterday, the dining hall was still open to all, according to Alexandra E. McNitt, director of marketing and communications for Harvard University Dining Services.

Debate last spring and this fall within the House prompted the decision to limit interhouse dining. After receiving received numerous complaints about overcrowding from students, Rosen consulted with the HoCo, the dining hall staff, tutors and students about dining policies before school began, Feldman said.

“The restrictions will be imposed to avoid the overcrowding at dinner that occurs when the dining hall gets so crowded from large sports teams and residents from neighboring houses—when their own dining halls are closed for special events—that Winthrop residents cannot get any food or sit down,” Feldman wrote in an e-mail.

Adams, Eliot, Kirkland, Leverett and Lowell Houses also have interhouse restrictions—meaning that Dunster, Mather and Quincy are now the only River Houses that lack any restrictions.

As he ate lunch in the dining hall with two friends on Sunday, Winthrop resident Bede A. B. Moore ’06 said he did not like the idea of rules governing where and when students can eat.

“If none of the Houses had them, then it wouldn’t be an issue,” Moore said. “I want to be able to eat with friends and not have to worry about [where].”

Moore, a member of the Crew team, said that athletes flock to Winthrop for dinner because it is located just across the River from Allston, where many teams practice.

Since some practices end at 6:45 and many of the River Houses already bar interhouse diners during dinner, Winthrop dining hall represented the closest—and, in some cases, only—place athletes could eat dinner before it ends at most Houses at 7:15, Moore said.

Several students said they opposed the upcoming restrictions because Winthrop prides itself on being an “open” House.

Lino Pertile, the Master of Eliot House—which also restricts interhouse dining Monday through Thursday for dinner and Sunday for brunch—said that he understood the new Winthrop policy.

“I would do the same if I saw that we needed to protect the interests of our own students,” he said.

Feldman said she hopes that the House will be able to make room for Winthrop residents hoping to share a meal with a professor.

“Winthrop is trying to institute more frequent and casual student-faculty dinners, which will likely be held once a month on Tuesday nights,” she said.

Robert P. Kirshner, master of Quincy House, said that his unrestricted House is hoping for the best.

“We aim to avoid restrictions on use of our dining hall or access to the House,” he said.