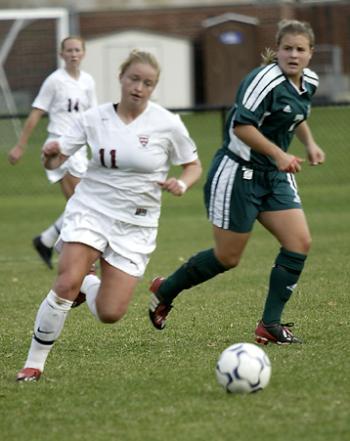 Sophomore SARA SEDGWICK (11) headed in senior Katie Westfall’s corner kick in double overtime for the golden goal in the women’s soccer team’s season-ending, 2-1 win over Columbia on Saturday.
By Alex Mcphillips, SPECIAL TO THE CRIMSON

NEW YORK, N.Y.—The 2003 Harvard women’s soccer season was a roller coaster ride of ups and downs—the latter category characterized most of all by a slate of disappointing ties.

On Saturday, in its last game of the season, the Crimson reversed that trend and came out golden.

Sophomore Sara Sedgwick headed in a golden goal with four minutes left in the second overtime—in the game’s 106th minute overall—to give Harvard (6-5-5, 2-1-3 Ivy) a 2-1 win over Columbia (6-8-3, 1-4-2) and secure a winning record for the Crimson in the season’s final game.

It was a redemptive end for a team that had played in six other overtime games this season, going 0-1-5 and failing to score in 107 minutes of overtime play. After the game, players and coaches were visibly relieved, celebrating with family and friends on the field.

“We just had this trend of tying all these games,” said senior forward Alisa Sato, who tied the game herself in the 26th minute, just a minute after Columbia had taken a 1-0 lead. “So it’s a good turn of events for us.”

The game-winning goal came with 4:33 left in the second overtime when senior midfielder Katie Westfall lofted a corner kick toward the box. Sedgwick found a seam among the mass of players and headed the ball over Lions goalkeeper Erissa Aronson and into the back of the net.

The goal was Sedgwick’s first this season, but not the first game-winner of her career. On Oct. 26, 2002 against Princeton, Sedgwick, then a freshman, headed a Westfall corner into the goal in double overtime, ruining the Tigers’ perfect 12-0-0 record.

“I decided, ‘I’m going to try the same thing today. I hope it works,’” Sedgwick said following Saturday’s game. “So I just called for the ball just after it went off [Westfall’s] foot.”

The assist was Westfall’s second of the game, although she hadn’t practiced since hurting her knee against Princeton Oct. 25.

Westfall’s performance brought her career assist total to 32, tying her for second all-time with Naomi Miller ’99 in the Crimson record book. Emily Stauffer ’98-’99 holds the all-time record with 36.

After the win, Westfall reflected on the final game of her four-year career.

“People keep saying you are sad, but sadness doesn’t even describe it,” she said. “We’ve been playing for fifteen years and its over. Obviously we’d rather go out with a win, so it was great.”

Columbia scored the game’s first goal in the 25th minute, when Shannon Muñoz fed a deep cross to freshman Emma Judkins, who volleyed it into the goal for her first career tally.

But the Lions’ 1-0 lead did not last long, as Westfall touched the rebound of a Sedgwick shot off the crossbar to Sato, who finished it 1:35 after Judkins scored.

After Sato’s goal, nearly 80 minutes of physical, scoreless play ensued, with Harvard unable to finish several shots. Overall, the Crimson outshot Columbia 21-8 and controlled the tempo of the game, led by sophomore forward Ayo Adigun, who entered the game in the 31st minute and provided a focal point for Harvard’s offense for the rest of the afternoon.

“This kind of game was made for her, where we needed kind of a target that we could play the ball to and hold it,” Harvard coach Tim Wheaton said.

And the result was made for the Crimson.

“We’ve had so many games like this where we’ve kind of dominated and ended up tying,” Wheaton said.

But Harvard finally got an overtime win, sending its seniors out with a victory in the process.

After the game, junior Alisha Moran said it best.

“Finally,” she said. “I don’t think I can see the season ending any other way.”