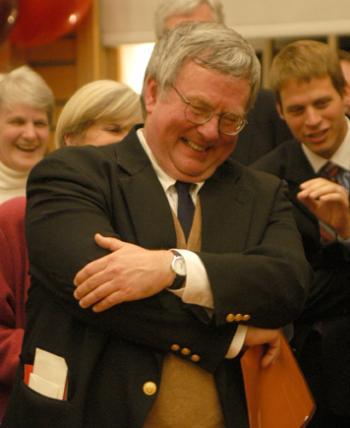 College administrators produced and performed in a musical spectacle, complete with fanfare and an Elvis medley, in a farewell celebration for former Associate Dean of the College David P. Illingworth ’71 last Friday.

Illingworth’s former colleagues coaxed him back to Harvard for a proper good-bye that recognized the former dean’s love of the arts.

Illingworth stepped down from his post last June after 22 years as an administrator, first working in the admissions office and then moving to University Hall, where he was the point-person for student groups.

Illingworth, also an Episcopalian priest, quietly left Harvard during summer vacation and traveled north to his home state of Maine to take on a deanship of a different sort—interim dean of St. Luke’s Cathedral in Portland, Maine.

“We certainly didn’t want him to slip away under the cover of the night,” said former Dean of the College Harry R. Lewis ’68.

People from all over the College helped plan the mini-production during the celebration, according to Associate Dean of the College Judith Kidd.

“It speaks to things that David loves,” she said. “It was put together by friends.”

As they mingled in the one-room chapel, members of the Faculty of Arts and Sciences’ Constructional Media Services set up cameras and did sound checks—actions that hinted at the surprise production.

Trumpeter Darryl J. Campbell ’06 said he included showtunes from the ’40s and ’50s and Harvard fight songs in this “fanfare” at the request of Band Director Thomas G. Everett.

Plummer Professor of Christian Morals Peter J. Gomes then stepped up to the podium to praise Illingworth and share memories of their many years working together.

“When I see you, I feel young. I see you as you were—and I pray you see me as I was,” said Gomes, drawing laughter from the audience.

“You are always giving of your time, energy and individual attention,” he said.

But the student performers didn’t steal the show.

When Office for the Arts Director Jack C. Megan took to the floor, he joked that the “King” of Illingworth’s musical passions—Elvis Presley—was alive, living in Watertown, Mass,. and performing for $100.

However, “Elvis” came down with the flu and Megan filled in, singing and playing his medley of Elvis classics, which included “Jailhouse Rock” and “Love Me Tender,” on the piano.

Lewis ended the evening by presenting Illingworth with a carved piece of the Sanders Theatre stage and a CD of Harvard recordings, including a 1969 choral performance of Illingworth as an undergraduate.

“I’m so glad we got the opportunity to say farewell for the time being,” Lewis said.

Illingworth’s departure came soon after Lewis—a long-time colleague—was forced out of his post as dean of the College as part of the restructuring of the administration.

But Illingworth said his move was prompted by desire to be nearer to his elderly parents and to return to his service of the Episcopal Church.

“It was at the right time. I wanted to make this move while I was young enough to have another job in me,” he said.

Illingworth ended the evening’s program by thanking his colleagues for the celebration.

Though Friday marked his official last day of work, Illingworth—ever the advocate for the arts—said he hoped to return to Cambridge and attend three College openings: the renovated Hasty Pudding, the new dance center and a student performing arts center.

He acknowledged the last invitation—one for a space with enough concert halls and practice rooms for all students who need them—right now remains only an unrealized goal, but one that he eagerly hopes will be achieved by Dean of the College Benedict H. Gross ’71.