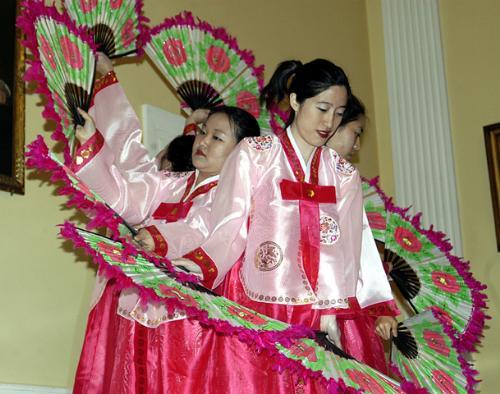 Korean drumming, classical Indian dance and a virtuoso yo-yo performance were all on display in celebration of Asian culture at the Cultural Extravaganza in Lowell Dining Hall Friday night.

About 200 people gathered for an evening of performances by eight campus groups and individual artists and a banquet featuring Asian dishes.

“It’s one of my most favorite cultural events. It shares food, culture and performances that we might not be able to see together,” said Crystal Hung ’05, secretary of the Harvard-Radcliffe Asian American Association, one of the sponsoring groups.

The Korean Drum Troupe—composed of nine drums and a gong, along with 10 percussionists in blue tunics with red and yellow stripes on the sleeves—opened the event, filling the hall with pounding rhythm and crashing metal.

Continuing with the dancing motif—but in a modern vein—the Harvard Asian-American Dance Troupe, danced to TATU’s “All the Things She Said,” in a performance that included elements of martial arts, hip-hop and jazz.

The Harvard Chinese Yo-Yo Club performed numerous tricks to Chinese pop music, using a yo-yo-like device in which a grooved cylinder is moved by a string attached between two sticks. The performers lost control of their intricate tricks a number of times.

“Everything was really good,” said Sam H. Lipoff ’04, “but the Chinese yo-yos, well, the whirling and the twirling was excellent. Dizzying, but excellent.”

In one of the other more popular acts of the night, sword-dancer Kevin Koo ’07 slashed, stabbed and parried his imaginary opponents while performing acrobatic feats and occasionally grimacing at the intense pain of an illusory wound.

But the eyes weren’t the only sensory organs that got a treat Friday night.

Two lines of tables stocked with food—provided by the eight student groups sponsoring the event—tempted the taste buds with such culinary delights as scallion pancakes, various noodles dishes and small Korean pastries.

Students in attendance said they enjoyed the evening.

Candice Chiu ’04, co-president of the Asian American Association, also said that this year’s logistics were easier to manage.

“I think in previous years it’s been pretty hectic,” she said. “This year it went very smoothly.”

Between 200 and 300 people were expected to come to the Cultural Extravaganza; actual attendance was about 200, better than last year, but still lower than the organizers had hoped.

“I think there were four plays opening tonight,” said Jia Han ’05, co-educational and political chair of the Asian American Association. “We also don’t have as much money this year, and the cold and rain this week have made postering less effective.”