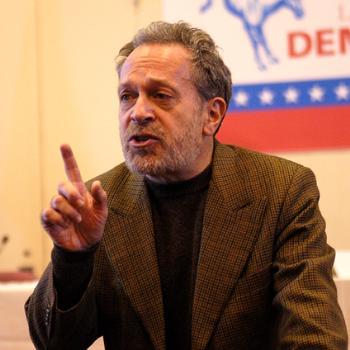 Former U.S. Secretary of Labor ROBERT B. REICH warns that the Democratic Party “as a party is comatose” at Saturday’s Law School convention.
By Michael B. Broukhim, CONTRIBUTING WRITER

Former U.S. Secretary of Labor Robert B. Reich, former Massachusetts Governor Michael S. Dukakis and a handful of other prominent Democrats rallied the troops this weekend at Harvard Law School (HLS) for the first ever Democratic Law Students Convention.

Through a series of formal speeches as well as more personal face time, the politicians united around a shared vision of student engagement and opposition to President Bush.

“We wanted to get people excited about politics and motivated going into this campaign year so we can be ready to get the Bush administration out of office,” said conference organizer Ariel A. Neuman, a second-year student at HLS. Neuman said he hopes the conference will become an annual event.

Reich, who is currently a professor at Brandeis University and formerly at Harvard’s Kennedy School of Government (KSG), spoke Saturday about the importance of the upcoming presidential election and the general state of the Democratic Party.

“It is very, very important that, regardless of whether you are for Howard Dean or John Kerry or Wesley Clark, that you and the people you know are psychologically ready to come out in support of the Democratic candidate who comes out in April or May,” said Reich. “You’ve got to keep your eye on the prize.”

Reich was highly critical of the Bush administration. “I don’t remember an administration that has ever been this bad,” Reich said. “On every issue—foreign policy issues, the economy, the environment—we can’t afford to have this administration for another four years.”

Reich suggested that Democrats “need to ignite the party of non-voters” and complimented Democratic candidate Howard Dean for “developing new sources of financing and getting his message out to youth.”

“Shaq and I have an average height of 6’2,” said the diminutive Reich, pointing to what he believed was the misuse of statistics in selling the Bush tax cut plan.

Reich said Democrats should concentrate on the issues of a growing income gap, education gap and Medicare. “There is a great deep-seated sense of fairness in this country. Democrats have got to go...speak candidly and deeply about fairness,” Reich said.

Shortly after Reich’s speech, Dukakis, now a professor at Northeastern University and a 1960 HLS alum, served as moderator for a panel entitled “Running for Office as a Young Democrat.”

Dukakis recounted the strategies he employed during his early campaigns for the Brookline town meeting and Massachusetts legislature. He attributed much of his early success to long hours of “door-knocking.”

“You can’t overestimate the impact in a campaign of face-to-face contact with people,” Dukakis said.

Dukakis urged the audience to consider running for public office. “There is no mystery to running for political office today,” he said. “Knowing yourself, having a passion for [public service], feeling very strongly about why you want to be in public life, and what you want to do when you get there, is critical.”

Barrios emphasized authenticity as the key to his success at overcoming what he saw as the challenges of being both an openly gay and Latino candidate in Massachusetts. “Your genuine interest in [your constituents], and your genuine interest in what you want to do for them, is what will carry you through politics,” said Barrios.

The convention also included a cocktail reception on Friday night which put students face-to-face with representatives from Democratic candidates’ campaigns.

Steve Grossman, former chair of the Democratic National Committee and current chair of the Dean for America campaign, was on hand for the reception after making a speech earlier in the day. Other representatives included Cam Kerry, John F. Kerry’s brother, and officials from the campaigns of Joseph I. Lieberman, Wesley K. Clark, John D. Edwards and Richard A. Gephardt, respectively.

“It was a rare opportunity for young people who are undecided about which candidate to support to gain a personal connection with the campaigns,” said Ben Schiffirn, secretary and treasurer of the HLS Democrats. “Many members of our group are conflicted about whom to support, and this was a great event to allow them to come to a better decision.”

Though the convention was generally well received, organizers expressed their desire for better attendance in the future. The Ropes-Gray Room in Pound Hall, which was set-up to seat over 200 people, was less than half full for both Reich’s speech and Dukakis’ panel.

“The small forum provided for a lot of interaction between students and speakers,” said Arun Bhoumik, co-president of the HLS Democrats. “Doing something for the first time means you don’t have a lot of credibility to start. It makes it hard to convince people that it’s going to be a worthwhile event.”

Nonetheless, attendees were optimistic about the event and the foundation it lays for the future. “It’s a good start; people would have liked more people to come with a liberal student body, but I feel the one’s that did show up will be galvanized and ready to support Democratic candidates,” said A. Jesse Tampio, a second-year student at HLS.

“A lot of people talk about what a liberal student body we have, but I think it’s a lot more diffuse in comparison to how disciplined conservatives have been,” said Tampio. “It’s crucial that progressives and liberals come together frequently in this way to strengthen the community and present a unified voice.”

According to Neuman, overall attendance for the two-day event was about 150-200 people.