Harvard’s back court a mystery as talented, yet unproven underclassmen must compensate for losses of captain, leading scorer and Ivy assist king 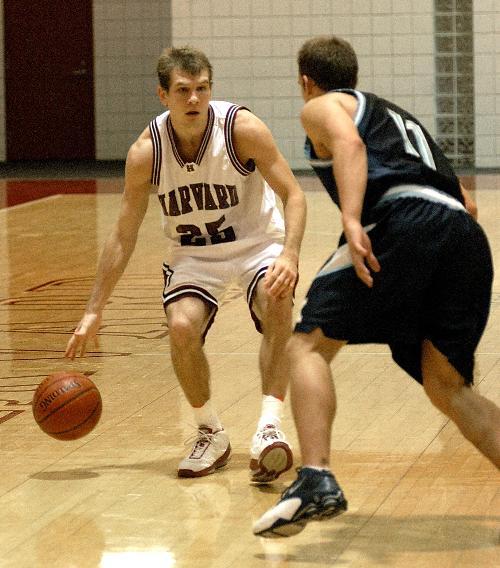 Tabula rasa. Forget about John Locke and consider instead the 2003-2004 Harvard men’s basketball back court. Having lost Elliott Prasse-Freeman, Brady Merchant and Patrick Harvey, this squad is starting with the blankest of slates.

Prasse-Freeman graduated as the Ivy League’s all-time assist leader and finished the year fourth in the nation in assists per game (7.7). Merchant averaged 15.4 points per game and knocked down 69 three-pointers last year as captain of the Crimson, while Harvey poured in 16.7 points per contest.

Yet such losses do not necessarily create a talent vacuum for the Crimson.

Almost all of the current back court players have seen only limited time, and opposing teams have not yet seen what these men can do.

“People don’t know who we are—not because we are not good, but because the seniors got most of the playing time, and they deserved it,” sophomore guard Michael Beal said. “We have a chance to show everyone how good we are.”

The only returning player who has ever started a college game is junior captain Jason Norman. He started the final eight games, averaging 9.0 points and 3.0 rebounds per game during that stretch, which included a 20-point outburst against Yale. The southpaw small forward will strive to be more consistent this year, he said.

“My first personal goal is to become the best defensive player in the Ivy League,” Norman said. “I also think I can be a good offensive player if I can hit the open shot and get to the basket.”

After having two knee surgeries since April, Norman spent most of his summer rehabbing.

“This wasn’t a very productive off-season for me,” Norman said. “I did learn a lot this summer by watching film and picked up a lot of concepts that will help me this season.”

With Norman now healthy, Harvard coach Frank Sullivan expects him to take on the leadership position that comes with the captaincy.

“My biggest transition will be becoming a vocal leader instead of just trying to lead through my play,” Norman said.

After Norman, there appear to be no sure starters in the Crimson’s three-guard offense.

“He’s as good a deep shooter as we’ve had,” Sullivan said.

Rogus said he labored over the summer to avoid becoming a one-dimensional player.

“I’ve never gotten the respect I’ve wanted for my defense, so I worked hard at being quicker and getting more steals,” Rogus said. “I really want to be a steal threat this year.”

At 6’4, Rogus stands as one of the taller two-guards in the Ivy League.His height and hard work should make him not only a better defender, but also a better rebounder, according to Sullivan.

Giovacchini will likely see a significant amount of time running the Crimson offense at the point. While some believe he will fill the void left by Prasse-Freeman, Giovacchini has more modest goals.

“My role on the team is to play solid defense and to set up our offense and try to direct people as much as possible while getting the ball to open teammates,” he said.

A victim of leg and foot ailments as a freshman and sophomore, Giovacchini hasn’t played a full season yet for Harvard.

“I worked hard over the summer to try to make myself stronger and more durable so that I can avoid injuries that have plagued my last two years,” Giovacchini said.

It appears that the work has paid off so far.

Behind the trio of juniors, youth will definitely be served with the sophomore pair of Beal and Zach Martin.

The 6’4 Beal can play any of the guard positions, and even played in the front court throughout high school.

Known as a slasher, he spent the off-season smoothing the rough edges around his game.

“I reworked my jump shot, working with [assistant] coach [Bill] Holden,” Beal said. “I am going to try to become a more consistent shooter from midrange and further back.”

His summer was not filled with drill after drill, however.

The famous tournament always attracts NBA stars, and this year was no different, as LeBron James and Tracy McGrady made appearances.

Beal also focused on his physical shape, gaining seven pounds while working out with the football team.

“He has really transformed his body,” Sullivan said.

This season, Beal hopes to become one of the better defenders in the league, in addition to improving his rebounding.

Offensively, he will try to set up his teammates.

“[I want] to get others involved with penetrating skills, look outside to Kevin and [freshman guard] Jimmy [Goffredo] and look to the big men inside,” Beal said.

This year should be an interesting one for Martin. At six-foot-four, he usually plays the three spot. But due to the injuries of two big men—sophomore center Brian Cusworth and freshman Brian Darcy—Martin has been filling in at the power forward position, going through what he calls “a transition phase trying to learn the four spot.”

Martin said he hopes to get “meaningful minutes” while helping the team any way he can.

“I’m just trying to do what the coaches ask of me so that hopefully they’ll have the confidence to give me time,” he said.

Two freshmen—Goffredo and Ko Yada—round out the Harvard back court.

While it is never easy for freshmen to come in and make an immediate impact, it appears that both will have the opportunity to do just that.

The 6’1, 175 pound Goffredo possesses a sweet shooting stroke that helped him average 30.0 points per game as a senior at La Crescenta (CA) High School.

“Jimmy has a great jumper and should see some good minutes,” Norman said. “He’s a scorer and will help us put some points on the board.”

As soon as Harvard began recruiting Goffredo, the comparisons to Harvey began.

“Jimmy’s got the same skill package,” Sullivan said. “We’re excited about having him.”

Yada, a 6’2 point guard from Newport (OR) High School, should also see significant time for the Crimson.

A solid ball handler and defender, Yada may be Harvard’s point guard of the future.

Whatever lineup Sullivan puts out on the floor, it will not suffer from a lack of intensity.

“With the people coming back, we all are very aggressive on defense,” Beal said. “We got at it every day last year in practice. Kev [Rogus] and I got noses broken in practice.”

Through the pre-season conditioning and practice, the players have gained a better feel for one another.

“[We] all bring different assets to the table and we are beginning to coalesce together, taking advantage of our particular skills [to] form a diverse back court,” Rogus said.

“We’re very inexperienced right now, but with more reps in practice and as the season progresses, we’ll be fine,” Norman added. “By Ivy League play [on Jan. 3], we should be one of the strongest back courts in the league.”

If that’s the case, Harvard could well be chalking up enough victories to cover that blank slate.