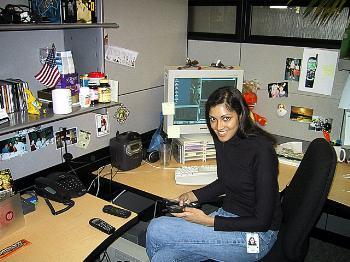 In dot-com terms, Lauren Baptist is a Google veteran. In 2000, Baptist left a Ph.D. program at MIT to join
By Brian Feinstein

In dot-com terms, Lauren Baptist is a Google veteran. In 2000, Baptist left a Ph.D. program at MIT to join the team of America’s favorite stalking tool. In the past three years, Baptist has worked as a powerhouse software engineer. After a recent recruiting visit to Harvard, FM sat down for a telephone interview with Lauren and her mysterious colleague from Google’s PR department.

1.Naturally, the first thing I did after scheduling this interview was Google your name. Surprisingly few results turned up. Did you tamper with the search engine?

Not at all… I’m actually pretty happy with my web presence.

2. During the whole recruiting process, do you ever find yourself Googling suspicious job applicants?

From time to time, I Google people I interview. It’s definitely a good resource.

3. Google has become a part of everyday American life. When you started working at Google, did you have any idea it would become such a cultural phenomenon?

I was hoping it would be. This was three years ago and it definitely hadn’t taken off to the extent it has now. But it’s a cool feeling now that all my friends know the Google name.

I don’t. I only do Yahoo Maps and Yellow Pages.

5. On the Google website you have some crazy testimonials. What is the most incredible Google story you’ve heard?

6. What did you do before you started working at Google?

I studied Computer Science at Dartmouth and began a Computer Science Ph.D program at MIT. I originally wanted to work as a professor or a research scientist but realized that it wasn’t for me.

7. Why did you decide to work at Google?

I came here because I love Google search. It’s something that I use all the time. And it’s really cool to work on a product that you believe in and love.

8. When you talk to students about working at Google, what is your typical pitch?

Well, I’m not a recruiter. But for me, it was always about the product and the people.

9. How would you describe the working atmosphere at Google?

Everybody here feels the same way about Google. The employees aren’t here because it’s just another job. The people here really believe in what we do.

10. Google’s most popular male celebrity in September was Orlando Bloom. Do you think he’s got the longevity to one-up Johnny Depp (#2) and Justin Timberlake (#3)?

Well I definitely think it’s not going to be a long-term thing. Johnny Depp has been around for a while. However, with the new Lord of the Rings coming out, Orlando Bloom may stay on top.

11. What do you like most about working at the Googleplex (Google headquarters)?

It is a very funky environment. It’s pretty relaxed. I’m sitting in my office right now—it’s a big open space with five other people. It’s just a crazy place to work. There are balloons and balls everywhere. And if you’re into riding, there are Segways and scooters to play with.

12. Do you ever find yourself googlewhacking* late at night?

Never. It’s not something that personally interests me. It’s not a Google-sponsored activity.

13. From what I understand, you’re part of the Blogger team at Google. What makes the blogging phenomenon more than just a bunch of extroverts ranting about their lives?

It definitely seems that the people who are into it are really into it and there are a lot of people who just don’t understand it. As someone who has been working closely with bloggers, I can say that the coolest thing about blogging is that it allows people to easily publish to the web.

14. So what makes blogging such a big deal?

It creates this phenomenon of everyday people having a voice on the web. It’s just a great phenomenon where people are writing what they care about and other people are coming to read about it.

15. On a scale of 1 to 10, how ridiculously rich are you going to be when Google goes public?

[To a Google PR representative] Eileen, how do I answer that?

* Googlewhacking is the cultish hobby of trying to Google search with two words and getting only a single result. See www.googlewhacking.com.