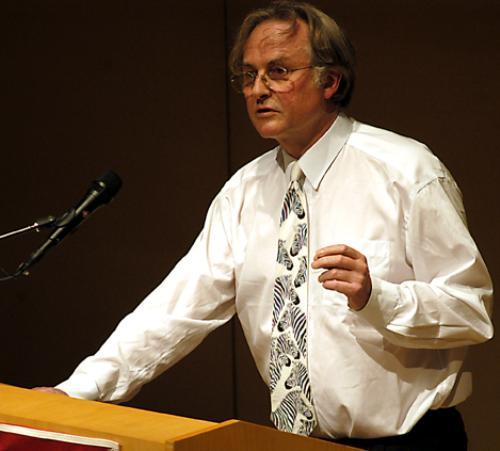 Despite the massive costs religion has imposed on human society, it persists because children do not question their parents’ beliefs, renowned Oxford scientist Richard Dawkins argued in a fiery lecture last night at Lowell Lecture Hall.

Before a packed house of 450 community members, faculty and students, Dawkins argued that the widespread presence of religion —despite its lack of obvious benefits—suggests that it was not an evolutionary adaptation.

Rather, he argued, religion is a societal norm that stems from children’s psychological tendencies.

“It is their unique obedience that makes them vulnerable to viruses and worms,” Dawkins said.

Society provides a breeding ground for the “virus” of religion by labeling children with the religion of their parents. Children, in turn, absorb these beliefs because they are conditioned to do so.

Though it is universal, Dawkin said, religion is not widely beneficial.

Rejecting the theory of many of his contemporaries, Dawkins argued that religion has not helped people to adapt or to survive. Beyond acting as a source of solace, religion provides no protection against diseases or physical threats.

“A person who is faced with a lion is not put at ease when he’s told that it’s a rabbit,” Dawkins said.

Religion, in Dawkins’ view, not only provides false comfort—it is actively divisive and harmful. Designated as Christians or Muslims by their parents, children are apt to face the discrimination associated with these labels, Dawkins said.

Dawkins pointed to the example of Protestant fundamentalists in Belfast spitting at young Catholic girls merely because their parents labeled them Catholic.

He said these labels also preclude children from making independent decisions as adults regarding their beliefs.

“Religion should be something for children to choose or not when they become old enough to do so,” Dawkins said. “The child is not [naturally] a Christian child, but a child of Christian parents.”

Pinker argued that peers, as much as parents, affect children’s beliefs.

He also attributed the spread of beliefs to the active faculty of the human brain, which he referred to as “the intricate activity of neurons.”

Although most audience members responded with approval to the controversial remarks, some found fault with his assumptions. One questioner accused Dawkins of basing his theory on the unproven premise that religion is false.

Lauren E. Tulp ’07 was also not entirely convinced by Dawkins’ theory. A practicing Roman Catholic, she said, “It was presumptuous to assume that everyone in the room was an atheist.”

Dawkins did, however, concede that there is a sort of religious quality that characterizes scientific phenomena.

“The sense of transcendence is something that is shared by those who don’t call themselves religious,” Dawkins said.

Dawkins will discuss the presence of religion in science at 5 p.m. today at Lowell Hall, as the second event of the Tanner Lectures on Human Values.

On Friday, he will conclude the lecture series with a seminar at the Wiener Auditorium at the John F. Kennedy School of Government.