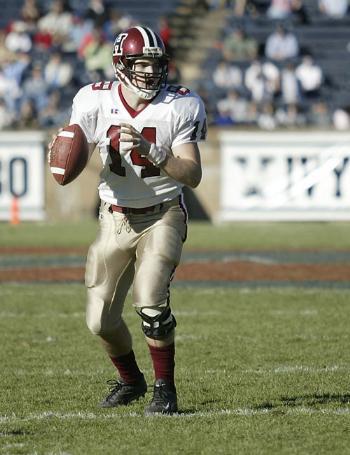 NEW HAVEN, Conn.—Ryan Fitzpatrick picked himself up off the field and brushed the dirt from his uniform. His fist was clenched and held tight against his chest as he limped toward the backfield, the tenderness in his left knee and ankle obvious to all but the most inebriated observers.

“I just taped up the ankle, taped up the knee, threw a brace on there and it was all right,” Fitzpatrick said.

Maybe he can convince himself of that fact, but Fitzpatrick had no business being out on that field. It’s beyond question that he was playing at less than full strength.

From the winces and the gingerly-planted steps, it looked a lot more like 50 percent.

But there would be no keeping Fitzpatrick off the field.

“He’s one of those kids who won’t take no for an answer,” said Harvard coach Tim Murphy. “I’m not sure the doctors are real fired up about him playing, but he’s just one of those guys. He’s just going to do his thing. He’s just incredibly tough, a competitor.”

His Yale counterpart, Alvin Cowan, outperformed him in virtually every statistical category—more completions, more yards passing, more yards rushing, fewer sacks. Cowan danced in the backfield, avoiding a potent Crimson pass rush all but twice on the afternoon and keeping the Harvard defense on its heels with the option and quarterback sprints.

Fitzpatrick’s feet might as well have been nailed to the dirt five steps behind the line of scrimmage. There wasn’t much chance he was going anywhere as he rushed just five times for a meager seven yards.

“He couldn’t take any [legitimate] snaps until Thursday,” Murphy said. “So to see the way that he responded today was amazing. As you could see, he couldn’t run, he was playing on one-and-a-half legs and [it was] just a tremendous and gutsy performance by him.”

Despite being outperformed on paper, despite sacrificing his mobility and flying-by-the-seat-of-your-pants style to injury and despite having practiced only three or four times in the past five weeks, there wasn’t anyone you’d rather have had lining up under center.

Not for a second.

And though the numbers don’t show it, Fitzpatrick—particularly given his condition—simply outplayed Cowan yesterday.

Fitzpatrick only threw the ball 22 times, completing 13 passes, but that’s all that was asked of him. The Crimson may have climbed on freshman Clifton Dawson’s back and let him carry the load, but Dawson was merely his quarterback’s second, allowing Fitzpatrick to pick his moments before arming him to strike blow after critical blow.

“[Fitzpatrick] made the plays when the plays were there,” said Yale coach Jack Siedlecki. “A couple deep balls. They didn’t throw the ball an awful lot, but when they did, they were effective.”

Talk about an understatement.

Of the 13 passes Fitzpatrick completed, four were for touchdowns.

You got the sense that he was just treading water until he sensed his opportunity was at hand. Sure, he short-hopped receivers who were open on a few occasions and threw behind his targets on others, but when it counted, you never would have known Fitzpatrick was in any pain at all.

“He is kind of like a colt,” Murphy said. “He’s kind of wild sometimes and he’s going to make some mistakes, but all of a sudden he just does that.”

In the early second quarter, without warning, he was transformed from the quarterback choked by his bit and laboring to complete a 10-yard pass out wide into the unbridled, pre-injury Fitzpatrick, beautifully lofting a ball over the top of Bulldog cornerback Andrew Butler and into freshman wide receiver Corey Mazza’s outstretched arms for the 26-yard score.

But he wasn’t done. Not by a long shot.

Waiting in the pocket, sitting back because he had no other choice, Fitzpatrick allowed his receivers to free themselves from their coverage before firing two strikes, first to junior wide receiver Rodney Byrnes, then to sophomore tight end Kelly Widman for 10- and 11-yard touchdown scores.

“I felt like Dan Marino back there, just sitting, surveying the defense,” Fitzpatrick said. “I’m not sure I like that pocket passing better than what I’m used to.”

But he sure looked comfortable doing it. And he still wasn’t done.

When junior wide receiver Brian Edwards ran the wrong route and slipped behind the Bulldogs’ defense, Fitzpatrick found him anyway.

“I don’t know how I saw him because I wasn’t even looking at him,” Fitzpatrick said. “But we’ve had a connection all year.”

Seventy-nine yards later, Yale was wishing Edwards had just run the right route instead of providing Fitzpatrick the opportunity to place the game out of reach.

Not that it would’ve mattered.

Fitzpatrick would’ve just found someone else. He’d have just smugly sat back in the pocket, saving himself for his next touchdown pass, waiting to crush Ol’ Eli’s spirit one more time.