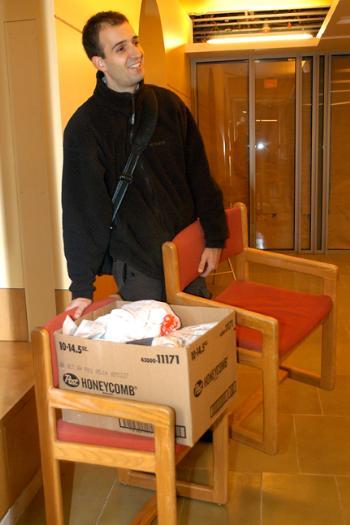 Harvard Law School student FILIP WEJMAN, moves in to the newly-renovated housing after living in the Marriot since September.
By Margaret W. Ho, Contributing WRITER

As Thanksgiving approaches, some graduate students who have coped with complimentary breakfasts and a heated pool for the last three months finally have a place they can call their own.

Students planning to move into the former hotel and Harvard University Police Department headquarters for the fall term arrived in September to find construction behind schedule and their apartments unfinished.

Harvard Real Estate Services housed the displaced graduate students at the Marriott Residence Inn in Kendall Square and the Marriott Boston Cambridge Hotel. Some students moved into the building in early November, but many units were still not livable until this weekend.

Marshall said unanticipated structural difficulties had a “mushroom effect” and delayed other phases of the project.

Only five apartments remain to be finished, with the completion of the project planned for December.

“When they told us we were going to be moving even later than we planned, I was a bit annoyed but I got over it pretty quickly,” she said.

“The hotel—maybe there was a bit more space, a gym, free food and a pool—but I feel better with my own place,” he said.

“The proximity of the campus is the biggest reason why I wanted to move here and get here as soon as possible,” said Hoyt. “It’s a ten-minute walk from here to the Graduate School of Design, whereas it was two T-stops away from the Marriott.”

First-year law school student Erin Abrams said she and her roommate were initially annoyed with the delay and planned to find an apartment independently. But she said the University quickly found a place for them in Botanic Gardens, another affiliated housing complex at 28 Fernald Drive.

“I am very satisfied with my current living situation, and am glad that I could stay in affiliated housing, even if it was not at 29 Garden Street,” she said. “I would say that I have had a positive, if unconventional experience with Harvard affiliated housing so far.”