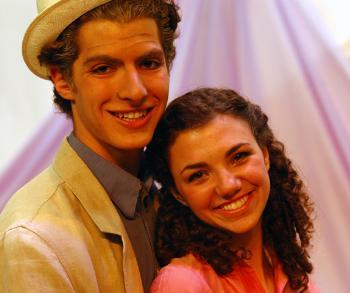 COME TO ME, COME TO ME: ALEX N. KANTER '04 and OLIVIA A. JENNINGS '06 play lovers from different cultures in the Agassiz's charming production of South Pacific, which ran for the past two weekends.
By Eugenia B. Schraa, Crimson Staff Writer

When I first saw the poster for South Pacific a few weeks ago, I was aghast. With its light purple background and a big tropical flower blooming from its bottom corner, it was clear to me that Harvard’s production of this cheesy 1949 Rodgers and Hammerstein musical would be a conventionally warm and fuzzy staging. The setting had not been moved to present-day Iraq, nor had the show’s naïve optimism been turned into an any sort of ironic post-modernist commentary.

But these renegades—led by producer Rebecca E. Rubins ’05 and director Rachel D. Galper ’05—knew well the jaded Harvard world that they were up against. In her program notes, Rubins talked about the challenge of “justifying the production of a traditional musical amid an undergraduate scene primarily dominated by abstract, extra-‘artsy’ shows.”

These girls were brave, to put it mildly. Their show ran on the same weekends as the extremely “artsy” Lorenzaccio ran on the Loeb Mainstage; Lorenzaccio’s bizarre video screen projections and set which often blocked the view of the action were far, far removed from South Pacific’s wide smiles, clever choreography and unending optimism.

South Pacific was plainly an amateur production—I will spare you my tirade against the horn section—but the expert vision of Galper and Rubins held it together; the duo knows what entertainment is all about. This was clear even before we reached our seats: Rubins was greeting every audience member, and enthusiastically told me, “I don’t think you could have chosen a better way to spend your night than to see the show.” She had already half won me over.

As soon as the curtain rose, I was struck by how well the set and lighting design worked together to conjure the play’s exotic world. Papier-mâché palm trees, swaths of pastel gauze drawn up to evoke the island-mountains, and bright lights in pinks and turquoises (shifting whenever there was a change in mood), were just the sort of cotton-candy mood-setters that the production needed. The effect was not particularly subtle, but it was completely satisfying.

The Agassiz has a small stage, but under Galper’s direction, it felt intimate without being cloying. Her choreographer, Kristi L. Jobson ’06, who is also a Crimson editor, deserves special credit for making the space reverberate with movement and dazzle, turning a show that could have seemed small and paltry into something that felt full and exciting.

But even when the dance was absent from the stage, the production’s energy never flagged; I have never seen a stage with so many smiling faces, and this helped to make this somewhat hokey musical ring true. Chief among the grinners was Olivia A. Jennings ’06, who starred as Nellie Forbush; even as the audience laughed at some of the cornier moments on stage, Jennings never stopped being, as she sings, “as corny as Kansas in August.” Jennings also proved an excellent singer and dancer, but her smile was what people will remember.

While Jennings made the role, long ago immortalized by Mary Martin, distinctly her own, Alex N. Kanter ’04 had more trouble living up to the great Ezio Pinza’s portrayal of Emile de Becque, Nellie’s worldly French lover. He can’t really be blamed, because his problem is one of stature; his small frame makes his bass voice seem quite unnatural, and no amount of white powder in his hair will make him seem much more than a skinny teenager. Kanter deserves credit, however, for the sweet sincerity that he brought to the role.

Evan D. Siegel ’07, as the dashing Lieutenant Cable, proved to be the production’s biggest hunk. He had a knack for smiling knowingly at the onstage goings-on, as if winking at the audience; he also had the show’s best voice (his high notes notwithstanding).

Oddly, considering the talent that he was up against, it was David B. Rochelson ’05 who stole the show as the mischievous sailor Luther Billis. Rochelson, who is also a Crimson editor, didn’t so much have perfect comic timing as perfect comic physicality. His whole body seemed off-kilter, from his exaggerated swagger to his seesawing dark eyebrows.

Despite its talent and energy, South Pacific suffered from its length; Galper and Rubins were obviously in love with the material, but they needed to trim it. And the first things that should have gone were the long overtures; there was no need to give the show’s orchestra any more listening time than it needed.

But, all in all, Galper and Rubins gave us a rare treat: a spunky musical to buck us up in the darkest days before our Thanksgiving release. I also appreciated the duo’s attempts to use the play to address our troubled present; as Galper wrote in the program, South Pacific has a “timeless human message of the power of prejudice and the importance of love during a tumultuous time of war.” I’m not sure that South Pacific really works on this level, but I like that this marvelous team viewed it that way.

South Pacific wrapped up its run last Friday, so I can only recommend that you go see the next Galper and Rubins musical, Crazy for You, when it opens next spring. I can’t imagine it being anything but a great time.

—Crimson Arts Critic Eugenia B. Schraa can be reached at schraa@fas.harvard.edu.