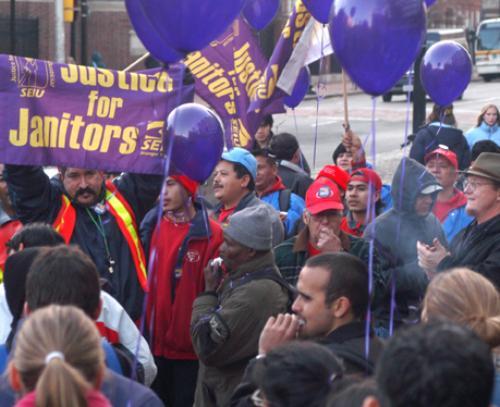 A group of Harvard workers protested outsourcing and University labor policies yesterday, chanting “Listen, we are in the fight” in Spanish as they marched down Mass. Ave.

The workers joined with members of the Service Employees International Union (SEIU) and Progressive Student Labor Movement (PSLM) to protest TH Niles, a company that is a tenant in 1280 Mass. Ave., according to SEIU Local 615 President Rosio Saenz. The company recently fired its unionized custodial workers and hired a single non-union worker to replace them for lower wages through the Commercial Cleaning Company, Saenz said.

Harvard is also a tenant in 1280 Massachusetts Ave., though it does not use workers from the same company.

In addition to the labor practices of Harvard’s co-tenant, the protesters also decried the alleged mistreatment of Ed Childs, who recently complained of dangerous cleaning conditions in Adams House as well as the inability of workers to attend Adams’ infamous Drag Night.

Due to his outspoken criticism, Childs has claimed that he is the victim of an investigation with ulterior motives.

“They are obviously tired of me, but I want Harvard to know we are not going away. We want justice,” said Childs, who is the chief steward of the Hotel Employees and Restaurant Employees Local 26.

The protesters listened to Childs speak in front of Adams after the group of approximately 50 marched around Harvard Square. Reflecting on his years of employment at Harvard, Childs emphasized the need for workers to speak up against administrative injustices.

PSLM member Madeleine S. Elfenbein ’04, one of a handful of students who attended the event, spoke about her experiences at Harvard since the Living Wage Campaign’s sit-in and the changes to the University’s labor policies that followed it.

“Since the decline in student activism in labor issues, there has been a correlating increase in workers’ rights violations,” she said.

According to Elfenbein, the University has also become less supportive and involved over time.

“I am beginning to doubt Harvard’s goodwill in labor issues,” Elfenbein said

University representatives declined to comment on the Childs’ case and on the practices of co-tenant TH Niles at 1280 Mass. Ave.