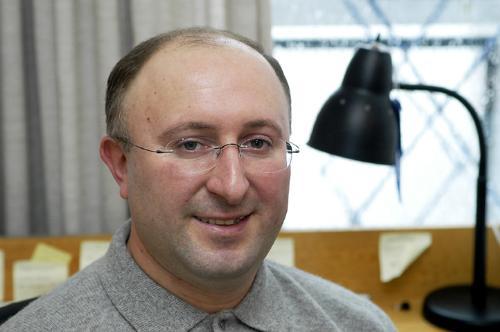 The nation of Georgia was embroiled in a “bloodless coup” last month, as its president resigned due to public protests against corruption and economic problems. But rather than participating in these historic changes, Georgian government official Gela R. Bezhuashvili, a mid-career student at the Kennedy School of Government (KSG), shared an insider’s perspective on the political turnover with his classmates.

International students like Bezhuashvili must often view such major events in their home countries from afar. Some face personal turmoil and deep ambivalence about being at Harvard during these times. But these challenging moments also facilitate more sharing of first-hand experiences in the classroom and in the dorm.

On Nov. 23, President Eduard A. Shevardnadze, who helped to bring about the end of the Cold War as foreign minister under Mikhail S. Gorbachev before Georgia became independent in 1991, stepped down as president of Georgia under pressure from public protests over corrupt elections, opposition groups and the military.

Bezhuashvili watched the events unfold on CNN and the BBC, like any other Harvard student—except he happens to be the country’s deputy defense minister, a post he’s held for three years.

“I couldn’t sleep for three to four days,” Bezhuashvili said.

He said the momentous period in Georgian history marked a turning point in his plans. “My intention was not to go back to my former job because of stagnation and not properly developed public policy in Georgia,” he said.

Georgia’s population of five million has lived under a sunken economy and extremely poor government services under Shevardnadze’s nearly 12-year rule. But, according to Bezhuashvili, the coup represented an affirmation of the power of the vote and the strength of Georgian civil society and institutions.

“I have no doubt I’ll go back now,” he said, noting that he wants to partake in the opportunity for change and modernization of a developing former Soviet Republic.

Some undergraduates also know the experience of being hundreds of thousands of miles from home when major news breaks.

“In a way I’m happy here, because I don’t have to live with it and deal with it everyday,” said Nilanthi D. Gunawardane ’05, an international student from Sri Lanka, where the president declared a state of emergency in assuming wide executive powers, in an internal political struggle, in early November. “But because my family is there, I worry about them all the time.”

Growing up with political instability in their native countries for most to all of their lives, though, the international students often have experience in coping with such situations.

“I’ve been affected by this all my life,” Gunawardane said. “I’ve been to a school where we’ve had to get checked for bombs all my life.”

“My parents called me that night,” said Kamilka Malwatte ’07, the other Sri Lankan international student at the College. “For all of us, we’ve kind of grown up with it. And I know it really shocks people when I tell people that we had drills on what to do in case of suicide bombings,” she added, “but it didn’t feel shocking to me.”

International students acknowledge that Harvard has no official support network for them during particularly troubled times in their home countries, and some say there’s no need for one, crediting fellow students with providing support.

“I was actually surprised by how many people were aware of what is going on, things I didn’t necessarily expect someone who wasn’t from the country to know,” Malwatte said.

In some cases, the events have fostered discussion in the classroom.

As a professor specializing in Russia and Eastern Europe, “you’re often dealing with young people whose home countries have been turned upside down,” said Timothy J. Colton, professor of government and director of the Davis Center for Russian and Eurasian Studies. When showed a PBS documentary about the period of transition in Russia from the early- to mid-1990s in one of his classes, Colton said, one of the families portrayed in the film was that of a student in the class, Marina L. Levitina, who attends the Graduate School of Arts and Sciences.

When news broke of the presidential resignation in Georgia, Robert I. Rotberg, professor of Bezhuashvili’s class on politics of the developing world, gave Bezhuashvili a chance to provide a personal account to class.

“He can speak from a deep acquaintance with the turmoil and crisis and the successful resolution of the crisis in his own country,” said Rotberg, who is director of the Program on Intrastate Conflict and Conflict Resolution. “There’s a rich cross-section of people who are directly involved in some of the issues we’re talking about,” he said of his course, which includes students from Venezuela, Rwanda, Pakistan, Zimbabwe, Malaysia, South Africa, Nigeria and China.

“It’s very diverse. That’s the beauty of the program,” said Bezhuashvili, who is completing his year of study in public administration under the Mason Fellows Program, which enrolls public officials and executives from around the world, at the KSG. “We learn as much from ourselves as from the professor.”

His classmates include the secretary of tourism from Barbados and a former U.S. legislator. In fact, the prospect of developing relationships with prominent officials and executives in countries from around the world was an important factor in Bezhuashvili’s decision to come to Harvard.

According to Bezhuashvili, a public official can conduct business much more efficiently by contacting former classmates rather than using formal diplomatic, often bureaucratic channels. “At the end of the day when the books are gone, you have the relationships,” he added.

Like many international students, Bezhuashvili intends to bring what he has learned about public management and leadership to inform policymaking at home.

“The best experts come to Georgia, but to understand what is really going on, one must be Georgian,” he said. According to Bezhuashvili, Georgians, with educations at home and abroad, will help their country more than the best foreign experts, who often bring generic packages of reform provided by the World Bank and other international organizations.

“You must be boiled in the water of your own country,” he said.

Gunawardane said the turmoil in Sri Lanka has affected her career plans.

And Malwatte said the reason he came to the U.S. “was simply because I wanted to use whatever I learned here to take back to my country.”

For now, though, Malwatte and other international students are mostly occupied with the daily grind of student life.

One classmate, upon seeing the tiredness in Bezhuashivili’s face, said, “You look like you need flaming tequila shots.”