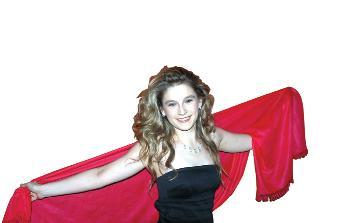 For Berenika D. Zakrzewski, every day is a performance. Whether she’s strutting around campus in her fur coat, buzzing around
By Cornelia L. Griggs

For Berenika D. Zakrzewski, every day is a performance. Whether she’s strutting around campus in her fur coat, buzzing around a Bee club party, or dazzling audiences at the piano, Zakrzewski pretty much ensures she won’t walk around unnoticed.

A world-renowned pianist, Zakrzewski has already amassed quite a résumé. Born in Warsaw and raised in Ontario, she spent four years at the Professional Children’s School in New York and participated in Juilliard’s pre-college program. She frequently travels worldwide for concerts, but has found time to perform at Harvard as well: Harvard invited her to play at University President Lawrence H. Summers’ inauguration. “I was really part of Harvard’s history. It was a tremendous honor,” she says.

Petite, with pale skin and masses of blond hair, Zakrzewski could fairly be described as a diva and prima donna, rarely seeming to let down her stage image. “She adores the limelight and functions very, very well in lights of flamboyances,” says Zakrzewski’s mentor, Robinson Professor of Music Robert D. Levin ’68. “That’s something she take to naturally and always has.” Zakrzewski, a joint music and government concentrator, makes little effort to hide her appreciation for some of the fringe benefits of being a concert pianist. “I love pretty things,” she says, sitting cross-legged on her furry leopard print-covered bed. “I love getting dressed up. I get to buy gowns for concerts. It’s a perk. I don’t even think I own a pair of jeans right now.”

Last month, Zakrzewski played one of Grammy-winning composer Krzysztof Penderecki’s original pieces before him. After practicing furiously all month for the performance, Zakrzewski says she was disappointed to learn that the performance fell on the night before the Harvard-Yale football game, her last at Harvard. However, there was no way a couple hundred miles were going to come between Zakrzewski and some good old-fashioned college debauchery. “I found a flight to New Haven—I didn’t even know New Haven had an airport,” she exclaims. After performing the night before, Zakrzewski woke up at 4 a.m. the next day to catch a plane from Pittsburgh to New Haven. She says, “I went with all of my luggage with my gowns to the game and we left all of my stuff on some random party bus. I was determined and told myself ‘I am going to that football game!’”

Roommate Melissa I. Lygizos ’05 attests to Zakrzewski’s playful side. “It’s been a lot of fun living with Berenika. She has a ton of energy and is always up for anything.” For example, Lygizos says, “Yesterday she was like ‘OK, we have to go play in the snow,’ and we built a snowman.”

Perhaps her biggest fan of all, however, is Levin himself. “It was immediately obvious that she is a young woman of enormous talent and great intelligence and street smart and enormous flair. Sometime you have to try to get people out of their cocoon, but Berenika is a born communicator.”