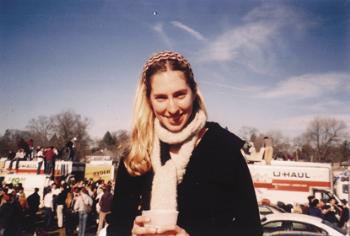 In it for the Long-Haul

I rush out to the lime green Bug sitting in the parking lot. I’ve gotten the goods. The minute hand
By Anne K. Kofol

I rush out to the lime green Bug sitting in the parking lot. I’ve gotten the goods. The minute hand of my watch is approaching 8:30 a.m. and I’m ready to high-tail it back to Harvard—but my getaway driver’s fallen asleep. I tap on the window and her freckled face comes to life with dazed alarm. She unlocks the door and I jump into the passenger’s seat. “Go!” I shout and we screech out onto the road.

I wish this had been the scene of an actual crime and I had been a jewel thief racing to flee the cops. Instead, my loot was the 24 sheets of film necessary to print an FM issue last spring, the scene was Charles River Printing, and my not-so-awake accomplice was FM Co-Chair Liz Maher. It was the aftermath of something far more criminal than a robbery or homicide: It was a typical FM production night, which meant it was the following day—and near the end of a seemingly eternal abyss of time.

When I grudgingly agreed to be one of FM’s proofers at the beginning of last semester, I thought I knew what to expect: Some removing of Crimson-hated serial commas, occasionally censoring Gossip Guy and a sneak peak at who had landed on As It Were each week. I was also prepared to pluck pesky libel out of an errant piece—and to see the sun rise on Wednesday morning every now and then.

Little did I know that it would be literally every now and every then. I have never left the windowless Crimson basement and seen darkness after a “night” of FM production. I have enjoyed many waffles and orange juices with Liz and FM Co-Chair Rachel Dry on Wednesday mornings in Adams Dining Hall. And, last semester, I fell asleep in my 9 a.m. Russian class so consistently on Wednesday mornings that it prompted my concerned teacher to ask, “Anya, what is wrong?” When I mumbled something in response about a magazine and a broken film processor, she shook her head and said “A newspaper isn’t worth failing out of school.”

I came to Harvard thinking that my priorities wouldn’t stray too far from what they had been in high school. I would be the model student, acing every paper, playing varsity tennis and keeping up my regular sitcom-watching schedule. When I didn’t make the tennis team, I went to my plan B—joining The Harvard Crimson and becoming one of the hard-core news writers. I did it at the time because to me it seemed like the thing to do. When the incoming managing editor told me freshman year that The Crimson was the alternate route for Harvard students who didn’t like school, I looked at him incredulously and told him that wouldn’t be me.

Three years later, my grades have plummeted, my social life outside The Crimson has dwindled and calling me a model well-rounded student would be a stretch for even my parents’ imaginations. Senior year has been particularly difficult as I’ve enviously watched friends acquire fellowships, grad school acceptances, jobs and boyfriends that seem only a distant possibility from 14 Plympton’s basement. Apparently, dropping the title “News Executive Editor and Comp Director” will not inspire hordes of young men to throw themselves at you or make a McKinsey recruiter swoon. As a result, I have spent the past semester trying to prove to my teachers, parents, friends—and myself—that The Crimson has been worth it, and much more.

Proofing FM has not exactly made answering that question easy.As FM proofer, you have to be the enforcer of the minutiae of Crimson form. I have probably removed upward of 1,000 serial commas from the magazine, changed a hundred “freshmen” to “first-years” and insisted dozens of times over that even if we’re talking about University President Lawrence H. Summers’ eating habits or love life, we can’t just refer to him as “Larry.” Starting out at The Crimson freshman year, I never would have thought that when I reached the heights of the executive board, I would spend my time performing damage control on Gossip Guy and correcting the spelling of “cunnilingus.”

Then there are those undignified moments that only the extreme sleep-deprivation of proofing FM for 16 hours can produce. Over the past year I have fallen asleep on the mysteriously stained couch in the basement design office, the white “leather” couch in the editorial office, and the conference room couch overflowing with yellow foam stuffing. Several times I’ve been awakened by the cleaning lady picking up the garbage strewn around me. My academic low points were definitely those sprints to my 9 a.m. Russian class in the same clothes I wore the day before, still getting there last after everyone who’d actually slept that night and having everyone stare at me as I rushed in out of breath. Then, the impotent feeling as my eyes drooped shut, my head nodded forward and I vaguely heard my teacher calling “Anya, Anya.”

In looking back over my time at The Crimson, and proofing FM, I didn’t want to let my love for the paper gloss over the dirty details of the past three years at 14 Plympton St. But I think those harrowing what-if-I-just-snuck-out-the-side-door FM proofer moments are exactly the root of my sentimentality about The Crimson. Those moments of extreme sacrifice are a main component of what has made The Crimson worth the slip in my grades and worth not seeing my roommates for days at a time. While I am proud of being a part of what I consider the best college paper in the country, it’s not been the noble pursuit of truth or a thirst for exposing injustice at Harvard that has lured me through our red door every day. It’s that I feel like an essential part of this 130 year-old institution.

Perhaps, through the eyes of observers, I could be empirically better off without The Crimson—I’d get more sleep, get better grades and occasionally get fresh air. I know that I’ve become dependent on The Crimson over the past three-plus years, and now, on my way out, I like to think that it’s come to depend on me too.

The example that I have from my FM proofing nights may be hard for anyone outside The Crimson to understand—and writing about it here may mean Liz never stops shooting me those dirty looks. But even though it was embarrassing, the week we printed the issue’s center spread at the wrong size—half its normal size, in fact—stands out to me as our best moment. I don’t know how we printed it at that tiny size, or whose fault it was (mine, most likely, since I am the last line of defense before the magazine goes to the printer). But instead of letting the distorted copy of the months-in-the-works “Harvard in the Media” scrutiny run, I suggested that the FM staffers pull a second all-nighter that week to restuff the copies of FM with a new center spread. Perhaps we should have run the distorted spread and not come back in at 4 a.m. that Thursday morning to blast music, eat donut holes and systematically insert the 3,000 new spreads until 8 a.m. The issue wasn’t door-dropped and my relaxed post-spring break feeling was killed, but schlepping a stack of fresh FMs into Mather Dining Hall at 8 a.m. and seeing the 10 students there pounce on it kind of made me glad I’d pushed for perfection.

One of the reasons I whined and stomped my feet and sold my soul in order to get out of proofing FM as frequently this semester is that most of my feeling of belonging has been fostered by my time on the news board. There’s nothing like the rush of adrenaline I feel when it’s 2 a.m. and the daily paper is still not done. There is nothing more satisfying to me than helping a reporter craft prose into an article of color, depth and analysis that makes a reader stop chewing his Cheerios. There is no better feeling than seeing a front I’ve slotted with a variety of stories, a great photo and more of the graphics we’ve been so ga-ga for lately.

Finding my niche at The Crimson has not only led me to willingly relinquish 50 hours a week to the paper, but brought me into a circle of the most amazingly warm, bright and dorky-fun people around. Where else could you play a game of keep-away with a stuffed animal, perform pirouettes around the newsroom in a dilapidated office chair, choreograph a routine to “Blinded by the Light” with a desk lamp or have philosophical discussions at 5 a.m. while massaging a cantankerous film processor?

I would never consider the time I’ve spent at The Crimson as being rooted in altruism—I’ve had far too much fun, made way too many friends and gotten too much satisfaction out of seeing the paper in my door box every morning. But I think what will be hardest when my time at The Crimson expires on January 25 is that there won’t be a community of 300 people depending on me to teach the next generation of reporters about libel, rat out that last serial comma from FM or make a clean early morning get-away from Charles River Printing.

This year at the Harvard-Yale game, I only spent a few minutes with my roommates because, even in New Haven, The Crimson called. I had offered to throw the first Crimson tailgate and driven a U-Haul down from Cambridge, with Liz and Rachel riding in the cab by my side. No one had asked me, a novice New York City driver, to host the tailgate and I could have spent a Crimson-free day basking in the sun and flitting around the final club tailgates with my roommates. Instead, I mostly stayed put at (and on) The Crimson’s 14-foot truck, helping tap the kegs and hugging the Crimson alums that came by.

Maybe The Crimson didn’t turn out to be the one-line resume item I had thought it would be. But driving the U-Haul back from New Haven, singing oldies as we barrelled down the dark Mass. Pike, I didn’t regret not seeing my roommates more ornot finishing my Dostoevsky. And yet, when we pulled into The Crimson’s parking lot that night, I was glad to go back to my room and finally get some sleep.

Now, I’m just sorry the ride is almost over.

Anne K. Kofol ’04, a history and literature concentrator living in Mather House, is a News Executive Editor of The Harvard Crimson. She drives a mean rental truck.