Grumet-Morris shines once again, but BC scores game-winner in third 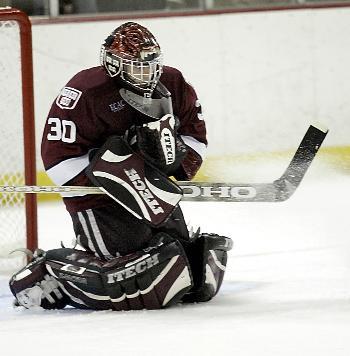 Junior goaltender DOV GRUMET-MORRIS was solid at the back last night against BC, but two goals off passes from behind the net proved insurmountable in the 3-2 loss.
By Jon PAUL Morosi, Special to the Crimson

CHESTNUT HILL, Mass.—With his team outshot for the third straight game—this time by a 38-18 margin—Harvard goaltender Dov Grumet-Morris had to produce nothing less than a career night to steal a victory from No. 2 Boston College.

Instead, Grumet-Morris was only spectacular—plain, old spectacular—the same way he’s been for the last month. And, as has become painfully routine, that wasn’t enough.

Outside of a shaky, sharp-angle goal in the first period by noted marksman Patrick Eaves, Grumet-Morris stopped every puck he saw—and some he probably didn’t—en route to a 35-save performance. But he could not overcome the Eagles’ slippery forwards and sizzling special teams alone as the Crimson fell, 3-2, before 4,862 at Kelley Rink.

“That first goal was not a good goal—everyone in the building knew that—but other than that, he was outstanding,” Harvard coach Mark Mazzoleni said. “He’s been outstanding for us for about four weeks now.

“Unfortunately, he’s not getting rewarded with any W’s.”

Despite having the fourth-best goals-against average in the nation (1.67), Grumet-Morris is 4-4-1. His team is 5-5-1 (4-4-1 ECAC), has lost two straight overall and is winless in its last eight games against the Eagles.

BC (11-2-3, 6-0-2 Hockey East) hasn’t lost since Oct. 24. The Crimson, meanwhile, lost for the second time this year when scoring first—something it did only once all last season.

Harvard sophomore Charlie Johnson gave his team its quickest lead since Dec. 29, 1999 (Dominic Moore ’03 scored 19 seconds into a 5-2 loss at Minnesota). Brendan Bernakevitch stripped BC defenseman Greg Lauze at the Harvard blue line and hit Johnson for a 2-on-1 goal at 1:24 of the first. It was the Crimson’s first shot of the game.

The teams traded power-play goals in rapid succession, with Harvard’s the more surprising of the two, since the Eagles owned the nation’s best penalty kill going into the game.

But within four seconds of the Eaves goal, BC’s Stephen Gionta went off for tripping and on came the Crimson’s new-look power play, with Noah Welch and Tim Pettit as the two point men, instead of Pettit, Welch, Tom Cavanagh across the top.

It took just 17 seconds for Pettit to thread a cross-ice pass to Bernakevitch, a new addition to the unit. He one-timed it past out-of-position BC netminder Matti Kaltiainen, giving Harvard a 2-1 lead at 7:11.

“Nice pass,” said Bernakevitch, who had a goal and assist in the game. “I had the whole net to shoot at.”

It was the Crimson’s second goal on three shots and was only the seventh power-play goal the Eagles have allowed in 16 games this season.

It also ended Harvard’s scoring for the night.

The Crimson allowed BC to tie it back up on the power play about nine minutes later. The play was set up the same way—with Eaves working behind the net—but this time he slipped a pass to the bottom of the circle, where Tony Voce was there for the one-timer.

“They had a set play and executed it well,” Grumet-Morris said of the Eagles power play, which finished 2-for-6. “I thought we did a good job of taking care of the rest of their outlets, but that’s the nature of a 5-on-4: They have the one extra guy.”

It certainly seemed like BC had an extra guy during the first and second periods as Harvard was outshot 13-6 and 14-5, respectively.

But Grumet-Morris couldn’t have been sharper in keeping the score tied. He turned aside back-to-back chances by Gionta with about four minutes left in the second, to keep it 2-2 entering the third.

But despite Grumet-Morris’s best efforts, the Eagles popped the game-winner a little over six minutes into the third. Again, it came from Voce, this time on an assist from a different Eaves—Ben, the BC captain and Patrick’s older brother—who warded off the Crimson’s Dennis Packard along the boards before feeding Voce as in the slot. It marked the first time all season Grumet-Morris allowed more than two goals.

Of the nine points scored by Eagles players in the game, eight belonged to players named either Eaves or Voce. Afterward, BC coach Jerry York said Ben Eaves was “as good a player as I’ve seen in college hockey.” York has been involved in the college game almost every year since 1963.

Meanwhile, Harvard fans had the heroics of Grumet-Morris to talk about.

He kicked away Voce’s point-blank power-play bid with seven-and-a-half minutes left in the game—one of 11 more dandies in the third—to keep his team in it until the end.

And the Crimson almost tied it. Tom Walsh put one through the pads of Kaltiainen with 3:20 left in the game, only to see it sail inches wide, and Cavanagh hit the post with a minute and a half to go.

“We could just as easily be talking about a 3-2 win for Harvard,” Grumet-Morris told the press corps outside the locker room.

Instead, Mazzoleni and his players were left to wonder again why they are a .500 team, scoring 2.55 goals per game—ninth-best in the ECAC. Last year, that same figure was a league-leading 3.91.

“When you have high aspirations, and it’s not happening for you, it’s test of your character,” Mazzoleni said. “I have confidence these guys will respond.”

—Staff writer Jon Paul Morosi can be reached at morosi@fas.harvard.edu.