Candidate hails Saddam’s capture as a bright sign on ‘Hardball’ 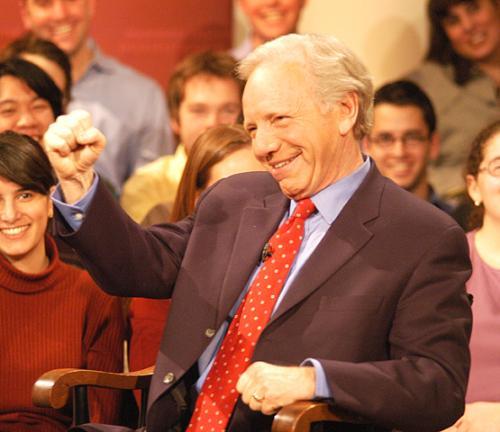 Senator JOSEPH I. LIEBERMAN stressed his continuing support of the war in Iraq and said he would rally around whatever Democratic candidate won the primary during his apperance on MSNBC’s “Hardball” last night.
By Wendy D. Widman, Crimson Staff Writer

Democratic presidential hopeful Joseph I. Lieberman pronounced his continued support for the war in Iraq and said that the capture of Saddam Hussein will ensure a safer future for America and the world, on a special bonus episode of MSNBC’s “Hardball: Battle for the White House” last night.

Lieberman, who said that he felt exultant and jubilant upon learning of Hussein’s capture Sunday, called for an Iraqi tribunal to try the former dictator and let him “face the death that he’s brought to his own people.”

The Senator’s turn in Chris Matthews’ Institute of Politics (IOP) hot seat came after a bumpy week on the campaign trail. Sadaam’s capture takes some pressure off of Lieberman, who has drawn heat for his pro-war stances.

Lieberman said he was still “grateful for the opportunity” to have run with Gore, but added that he wished that he had heard of Gore’s endorsement “from a source other than the media.”

Matthews questioned Lieberman sharply on the full nuances of his Iraq stance. The candidate stumbled when Matthews asked him to provide a “consistent standard” for preemptive war, something fit to be printed in a “first grade textbook.”

Lieberman eventually concluded that “imminent danger” justified the current situation in Iraq, which he dubbed the “final battle of the gulf war.”

Lieberman was resolute about mending the strife that the war has caused both in the international community and at home.

In response to Kennedy School of Government Dean Joseph S. Nye’s question about how to improve America’s place in world opinion, Lieberman pointed to other issues, such as global warming and the AIDS crisis as common ground on which to build trust between the U.S. and other countries.

The goal should be reestablishing the U.S. as a “moral” and not just a “military superpower,” he said.

Dean said yesterday that Saddam’s capture “hasn’t made America safer,” while Clark said the development offered the U.S. the opportunity to fix past failures in its Iraq policy.

Lieberman pulled no punches however when it came to the man who defeated him and Gore in 2000. “I love America and I hate what Bush has done to America,” he said.

He called for Democratic candidates to introduce reforms to help eliminate poverty and provide the U.S. economy with a “fresh start.”

He said he was the first member of his family to attend college, and reiterated his support for the No Child Left Behind act.

A Yale graduate, Lieberman said he was wait-listed when he applied to Harvard.

In one of several light moments of his appearance, Lieberman thanked the audience, joking, “I’m glad I got in this time.”

He drew laughter earlier in the evening, when he quipped that he thought an audience member who inquired about the Democrats’ prospects in the wake of Sadaam’s capture was actually going to ask who Hussein would endorse.

After the stage lights went down, audience members were divided about whether Lieberman had distinguished himself from his fellow Democratic contenders—or in some cases, Bush.

“I would have liked to see him take a firmer stance on what qualified Sadaam as a threat to the U.S.,” said Ezra J. Rapoport ’06.

“I liked that he was pro-environment,” said Brian A Matthay ’04 in response to Lieberman’s stance on the Kyoto Accord. “I haven’t seen that with the other candidates.”

But IOP member Adam J. Scheuer ’06 pointed to a resemblance of Bush.

“His rhetoric seemed similar to that of Bush when he talked about seeing the war in terms of good and evil,” Scheuer said.

Lieberman’s “Hardball” appearance came after a long courtship. Matthews’ interview with Clark last week was to be the final in the series, which had brought seven of the Democratic contenders to the JFK Jr. Forum.

But Lieberman announced last Wednesday that the months of scheduling negotiations between his campaign and Hardball had finally succeeded.