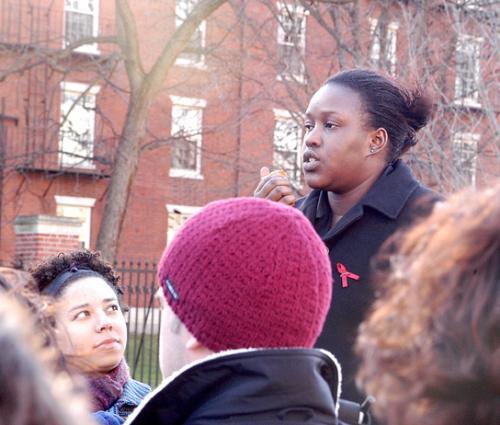 KUDZAI A. MAKOMVA ’06 of Zimbabwe speaks of the effects of AIDS in her homeland as AMANDA S. ALEXANDER ’04 looks on at a rally outside of the Science Center yesterday.
By Robin M. Peguero, CONTRIBUTING WRITER

Donning black rubber boots and a navy jumpsuit, Aimee K. Miller ’07 added her voice to the chorus: “People with AIDS are under attack. What do we do? Act up, fight back!”

Despite cold temperatures and gusting wind, Harvard AIDS Coalition (HAC) members and supporters gathered in front of the Science Center yesterday to mark the start of World AIDS week with a rally for AIDS education.

As protestors lambasted President Bush—and Harvard—for not doing enough in the fight against AIDS, winds whipped away many of the 85 white plastic boards dressed in red ribbons that the group had constructed to symbolize the 8,500 people who die from AIDS every day.

By the end of the half-hour rally, only a handful remained standing.

“It’s a cold wintery day and we’re a small group of people but small groups of people can still make a difference,” Dr. Louise Ivers, a member of the non-profit organization Partners in Health, told the crowd of around two dozen.

Members of the HAC remained silent all morning in observance of the 7,000 Africans who die each day of AIDS, but broke their silence to kick off the rally with chanting at 2 p.m.

Gumboots, an African dance group that performs resistance dances, helped rouse the crowd out of its silence with slaps, periodic “ohs,” high kicks and stomping—all in their uniform black rain boots.

Attracted by the flashy colors of the Gumboot members—who were decked out in everything from a bright yellow bandana to a neon green sweatshirt—Tiffany Chan ’07 joined in the rally on her way home.

“I’m actually quite sick and I probably shouldn’t be here in the cold,” said Chan. “But this is such an important issue and we’re so complacent, here in our Harvard world.”

While the protest was directed against President Bush’s AIDS policy, several rally speakers were equally critical of Harvard.

“The majority of AIDS patients are located in the Third World but the resources are here in America and in Harvard,” said Jacob Bor ’06.

Kudzai A. Makomva ’06, who hails from Zimbabwe, said the situation is so dire that Harvard should get involved.

“The greatest resource Harvard can use is its name. If it just supported dropping the debt, treating the people, donating the money,” Makomua said. “Harvard is not getting involved because they feel AIDS to be a political issue.”

Although HAC members noted that Bush suggested a five-year $15 billion authorization bill to combat AIDS in Africa, they criticized him for not putting the plan into action yet.

HAC Vice President Tina M. Valverde ’06 praised Democratic presidential candidates for proposing the dedication of $30 billion in aid to the crisis in Africa.

The HAC invited Democratic presidential candidate Howard Dean—who was in town to appear on “Hardball,” which broadcasted live last night from the JFK Jr. Forum—to attend the rally, but he did not.

“Although there was dispute about our critical Bush posters, I’m glad people are talking about it,” said head of the HAC’s research group Sarika P. Bansal ’06, referring to a debate over whether the posters were too anti-Bush. “I’m hoping this day, this week to be a presence on campus.”

The HAC will continue to raise awareness of World AIDS Week by holding panels, teach-ins, video screenings and a culminating party on Friday.