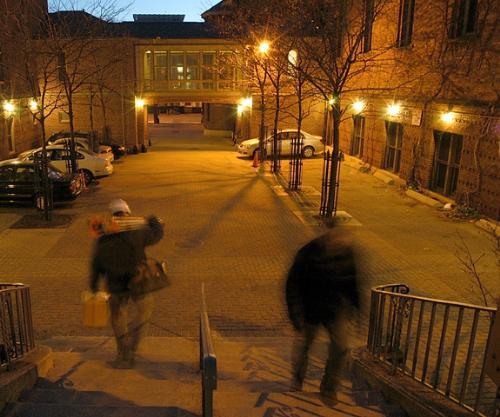 An undergraduate on her way to Dunster House was sexually assaulted in the St. Paul’s Church parking lot, seen here, on Tuesday night.
By Jenifer L. Steinhardt, Crimson Staff Writer

The student was struck from behind with a blunt object, forced to the ground and sexually assaulted while cutting through the church’s parking lot on the way to her Dunster House residence, according to the Cambridge Police Department (CPD).

The victim, who was taken to the hospital and released early yesterday morning, described the assailant as a six-foot white male, 30 to 40 years old with a heavy build, CPD spokesperson Frank D. Pasquarello said. No arrests have been made and an investigation is ongoing.

Students often cut through the church’s parking lot—the site of the assault—which is located between Arrow and Mt. Auburn streets, near Adams House A and B-entryways.

“ I see the people I know who live in Mather and Dunster cutting through the parking lot just as much as I see them walking around it. A lot of times I feel more comfortable cutting through,” said Mather House resident Tanya F. Perkins ’04. “There are usually people in the church at all times of night, and it’s sacred ground so I rationally assume that it’s safer.”

Harvard University Police Department (HUPD) spokesperson Steven G. Catalano said that HUPD will increase the presence of both uniformed and plain-clothes officers in the area.

He recommended that students walk in groups, especially at night.

“There is safety in numbers,” Catalano said. “Try to avoid short cuts and dimly-lit areas or areas not well traveled at all cost.”

A safety advisory published by the University recommends that students walking between the Mather-Dunster area and the Yard take the triangular path from Cowperthwaite Street to Grant Street, turn left on Grant Street, right on DeWolfe Street, left on Mt. Auburn Street and right on Plympton Street to Mass. Ave.

The victim ran to a friend’s room in Adams House immediately after the assault, her friends said.

Four other assaults have taken place on or near campus this semester, one of which also involved an undergraduate.

On Oct. 22, a Harvard student was attacked at approximately 8:30 p.m. when a male grabbed her wrist and waist, spun her around, grabbed her breast and then attempted to remove her coat. The victim struck the face of the suspect, who returned the blow and fled the area.

Pasquarello said no arrests have been made in that case, where the suspect was described as an 18 to 25-year-old light-skinned male with a medium build, not matching the description of the suspect in Tuesday’s assault.

CPD has arrested a man in connection with the other October assaults where a man groped three women—none of whom were Harvard affiliates—in separate incidents as they walked alone near Huron and Concord Avenues.

Pasquarello said that despite the recent assaults, the overall crime rate in Cambridge is down from last year.

“But when a person gets assaulted like this, it’s not reassuring to them that the crime rate is down,” Pasquarello added.