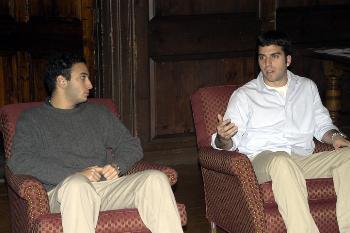 Few undergraduates have to deal with the constant demands of a problem child. But when you’re dealing with a company
By Catherine E. Jampel

Few undergraduates have to deal with the constant demands of a problem child. But when you’re dealing with a company in its infancy, says Hani N. Elias ’05, it tends to be “always on your mind.” Alongside Adam Kalamchi ’05, Elias helped found College Corps, which helps undergraduates work with non-governmental organizations in international development by eliminating logistical and financial barriers.

Kalamchi manages the fundraising part of College Corps while Elias concentrates on program development. And both find that it’s a full-time job: they must stay on top of annual legal and financial papers and have produced a 40-page business plan that went through 13 different versions. It outlines strategy and a budget that details “down to the penny every dollar we will need to spend in the next three years,” says Elias.

Not merely a Peace Corps for undergraduates, College Corps operates independently from government funding, recognizes the short summers in which undergraduates have to work, and emphasizes an academic component through a seminar program because Elias and Kalamchi believe “academics and firsthand experience are complementary.”

In order to eliminate the financial burden on students from a typical summer of volunteering, Elias and Kalamchi have dedicated themselves to intensive grant writing, and initiated appeals to individuals, foundations and universities. By being close to but independent from Harvard, Elias and Kalamchi avoid possible donors playing the Harvard card. “People would ask, ‘You go to Harvard, so why can’t they support you?’” says Elias. Though their position as a non-profit allows them to appeal to philanthropic groups which wouldn’t normally fund individual students, it also creates complications, such as compulsory registration in each state they work in.

Kalamchi’s experience last summer working part-time in ad sales for a mouse-pad company taught him that “you have to believe in what you’re selling.” His passionate belief in College Corps keeps him resilient through the mechanics of fundraising correspondence. “It’s hard to have people pick apart something we’ve worked on for a year,” says Kalamchi. As self-described 20-year old college kids, “you don’t know how seriously a 65-year old millionaire takes you until they write you a check.”

Their personal investment in the program stems from their international biographies. Kalamchi’s father is from Baghdad and Elias’ parents are Egyptian. One of the programs affiliated with College Corps works in a village Elias has visited many times in Egypt. Elias’ first-hand experience impressed upon him the need for education in the developing world. Though they both have traveled extensively and attribute their backgrounds as a motivating factor, ironically neither Elias nor Kalamchi have been able to travel or work for any of these groups since starting College Corps.

Not quite Matt & Ben, Ben & Jerry, Simon & Garfunkel, or Itchy & Scratchy, Hani & Adam look forward to receiving a projected 100 applications to their brainchild next summer as they baby-sit their non-profit. Says Kalamchi, “It’s as close to being married as possible.”