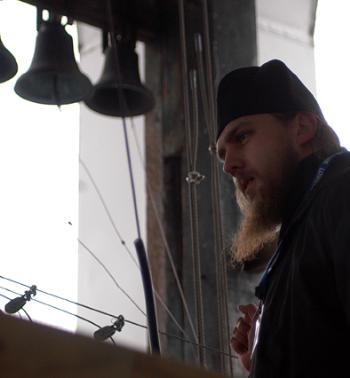 After years of clicking a link on the Lowell House website to hear their Russian bells clang, a delegation of monks from Moscow rang the bells in person for the first time this weekend.

The group journeyed from the Danilov Monastery to Mass. Hall to ask University officials for the bells’ return.

“It was a positive meeting,” said Vice President of Government, Community and Public Affairs Alan J. Stone, who spoke with the monks on Friday. “[It] was an opportunity to get to know each other and begin to discuss the topic of the bells.”

With another hour of discussions planned for today, Stone refused to discuss the details of the conversations.

The bells currently hanging in Lowell’s belfry arrived at Harvard 73 years ago, donated by American entrepreneur Charles R. Crane, who bought them from the Soviet Union.

Representatives of the monastery have been seeking the return of the bells for almost 20 years, but intensified their quest last year before the 700th anniversary of the death of St. Danil, the monastery’s founder.

At a discussion in the Lowell House Library on Friday, the monks described the bells’ spiritual dimension and the monastery’s past while Lowell historians talked about the instrument’s time hanging in Cambridge.

The monks then joined Lowell’s bell-ringers—known as Klappermeisters—as they played the bells Friday and Sunday.

“[I] wanted to record these bells’ sound to get familiar with [the sound] and the bell-ringing tradition here,” Ogryzkov said through a translator.

As onlookers’ cameras flashed, Ogryzkov quietly tested each bell’s tune for a few seconds by lightly pulling on the attached wires.

Those familiar with Harvard’s improvised bell tunes were surprised by Ogryzkov’s style of playing, based on a percussive ringing of Sacred Oil, the second largest bell.

“[Ogryzkov] had to use all four of his limbs at once,” marveled Professor of Mathematics Noam D. Elkies, who is also a musician and composer. “What we do is like playing with one hand on the piano—and he’s playing an organ.”

Campos described Ogryzkov’s playing as “better than I ever could have hoped.”

“We’ve been experimenting with our style,” Campos said. “What we thought was modern was in fact the more traditional way of doing it.”

Ogryzkov noted that the Klappermeisters’ approach to bell music, which involves playing popular tunes, clashed with the traditional style.

“They were treated less as an instrument and more as an attribute of church service,” he said of the bells’ history. “In a way it doesn’t seem quite right that bells made for religious purposes are being used this way—but the fact that they are played...is better than them not being played at all.”

Though Lowell residents praised Ogryzkov’s bell-playing, they disagreed on the main question surrounding the visit—whether the bells should be returned to Moscow.

“I think that Lowell and Harvard have the right to [the bells],” said Mary C. Serdakowski ’06. “They define who Lowell House is.”

But Kaartiga Sivanesan ’06 was not convinced.

“It does mean more to the Russians than it does to us,” she said. “You don’t need to have the original Russian bells.”

“We should give the bells back as long as they give us replacement bells,” agreed Michelle T. Sonia ’06. “Russia’s older than Lowell...Their traditions go back longer than ours.”