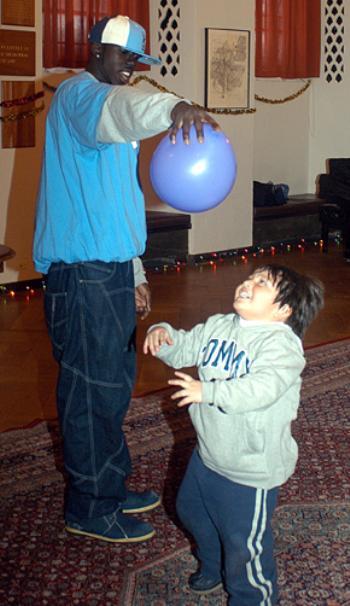 Approximately 20 workers and as many students gathered in the Adams House Lower Common Room Saturday to mark Worker Appreciation Day.

Turnout was low, but still a marked improvement over last year, thanks to what organizers called a better coordinated approach to promoting the gathering.

“Last year workers didn’t know about the event,” said Nina A. Niamkey ’04, an officer in the Black Students Association (BSA). “This year it helped that students had personal contact with managers.”

Anne M. Morris, a BSA officer, stressed how it was important that the event be run by students.

“The workers [appreciate when] something is done for them by the students,” Morris said.

Decorated with holiday lights and garlands, the gathering was designed to give workers a break, but few attended.

The Caribbean catered food was untouched, still wrapped in foil almost an hour into the event.

Organizers attributed the low worker turnout to the snow.

“Campus doesn’t shut down for snow days. [The employees] are the ones cleaning and salting the paths,” said Olamipe I.A. Okunseinde ’04, president of the BSA. Okunseinde is also Crimson editor.

Worker Appreciation Day was co-sponsored by 10 student groups, including BSA, Fuerza Latina and the Association of Black Harvard Women, and was intended to express their gratitude to the people who make Harvard work.

“It is easy for us to get accustomed to things [running well on campus],” said Niamkey. “They make sure the dining hall runs well and that walkways are shoveled.”

Performances by the comedy troupe On Thin Ice and the Harvard Callbacks a cappella group, highlighted the event. The Callbacks brought smiles to the faces of many workers as they entered the Adams Lower Common Room.

The event also featured a small raffle for Coop gift certificates, Starbucks coffee and other prizes.

Niamkey said she plans to hold another such event in the spring at the Radcliffe Quad, when snowy weather hopefully won’t be a factor.