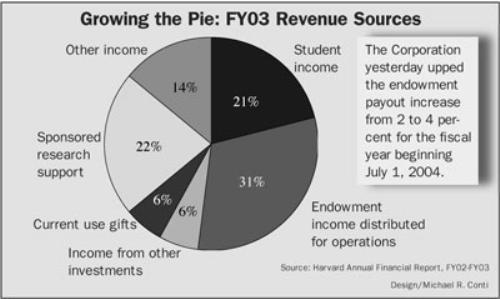 Faced with soaring benefits costs, the Harvard Corporation voted yesterday to loosen its purse strings, taking the rare step of revising funding levels it had already set for the next fiscal year.

After voting in November to increase the endowment income Harvard doles out to its various schools by 2 percent for the Fiscal Year 2005—the year beginning next July 1—the University’s top governing body opted yesterday to increase that raise to 4 percent.

Part of that 36 percent jump in benefits costs came from a recalculation intended to account for a sputtering economy. That recalculation revealed that last year’s expenses were much higher than originally anticipated—pensions costs rose 100 percent, post-retirement welfare costs rose 61 percent and health care costs jumped 18 percent.

“This came as a surprise to everyone, because we had not always forecasted accurately,” Berman said. “The schools and the rest of the University are very, very concerned about this. It’s a big hit—and we don’t see the health insurance piece slowing down.”

Berman said the funding boost was in response to these surprisingly large pension and healthcare costs.

She said University President Lawrence H. Summers suggested the most recent payout increase in a meeting with her two weeks ago, in which Summers worried the benefits costs would place too tight a squeeze on the University budget.

“He was quite concerned that this was such a big one-year hit that it would be difficult for the schools to deal with,” she said.

Berman added that although revising previously set payout was virtually unprecedented, the Corporation wanted to ease the burdens facing the University.

“The Corporation decided this was just the sort of extraordinary event they wanted to deal with by changing the payout arrangement,” she said.

This decision comes just months after the Corporation warned it might not raise payout at all for FY05 due to lackluster endowment performance.

Berman said November’s about-face was prompted by a better-than-expected fourth quarter for the endowment.

After FY03 returns of 12.5 percent, many faculty questioned the initial decision to increase payout a meager 2 percent, but Summers defended the move as necessary to protect the value of the endowment. And even with the extra funds approved yesterday, the University’s cash-strapped units will likely continue to face serious financial constraints.

“An additional two percent on the endowment is not very much,” Berman said.

As she and University Provost Steven E. Hyman proceed with their annual unit-by-unit review of Harvard’s budget, they will encourage schools to keep expenses in check. “We expect schools to live within their budgets,” she said.

And Berman said she has asked departments in the University’s central administration to draw up budgets for zero growth and a 5 percent expenditure cut in the next fiscal year, a move she calls the first step towards a goal of holding their expenditures steady in lean financial times.

“The president has told a lot of people that that’s what we’re going to do,” Berman said. “So I hope we get there.”

The release of Harvard’s annual financial report—approved by the Board of Overseers during their monthly meeting on Sunday—underscored the financial constraints facing the University. Expenses rose 8 percent last year to $2.4 billion, outpacing revenue growth.

Berman expressed concern that the University’s main revenue sources may wane, compounding the fiscal squeeze already facing Harvard. She said last year’s stellar endowment returns had helped to offset increased expenses. “Nobody likes to count on something like that,” she added, however.

Other major revenue sources are also unlikely to perform as well in the future, according to Berman. She said that despite a 6 percent jump this year, outside funding will likely decline in the coming years.

And the immense public pressure to limit tuition upticks will likely preclude Harvard from mitigating increased expenses with higher student fees, she said.

“What we’re seeing for other income streams is concerning,” Berman said.

At the same time as the University is seeing its revenue sources drying up, spending increases of over 10 percent in certain cardinal budget areas—student aid, compensation and costs associated with maintaining the physical plant—drove expenditures higher in FY03.

Total University-wide compensation costs rose 12 percent to $1.3 billion in FY03, largely the result of the 36 percent jump in benefits to faculty and staff.

Further implementation of the Wage and Benefits Parity Policy—adopted as part of the recommendations of the committee convened in the aftermath of the 2001 Living Wage sit-in—has also cost the University a great deal, although Berman said the exact amount was hard to estimate.

At the same time, Harvard’s space and occupancy costs rose 22 percent, largely due to the University’s larger-than-ever land holdings and high utility expenditures over the cold winter of last fiscal year.

The University committed $526 million to its 434 capital projects last year, 23 percent of which went to the acquisition of the Blackstone power plant and 91 acres of land in Allston.

An additional 45 percent was spent on new construction—the new wing of the Science Center, the Center for Government and International Studies the science and administration building at 60 Oxford St., graduate student housing at One Western Ave. and the New Research Building at the Medical School.

Student aid rose 11 percent after a 15 percent increase in FY02, which Berman attributed to greater need in a bad economy coupled with enhancements in the University’s financial aid packages.