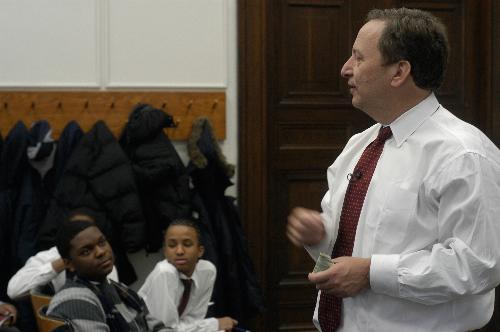 Singers from the Boys Choir of Harlem chucked snowballs over John Harvard’s lap on midnight Friday, shouting as they tried to hit each other with icy grenades in the Yard.

Passersby would think they were Harvard students, and they’d be right—almost.

For the past week, the 45 teenagers have lived in the Houses, been taught by Harvard’s most famous professors and performed for a sold-out crowd in Sanders Theater.

And then they had their snowball fight.

The residency was planned by the Office for the Arts (OFA) to give the choir—a touring arm of the intensive choral academy—a taste of a Harvard education.

In turn, the world-famous choir gave the Harvard community a performance to remember.

It was a visit unprecedented for both groups—the choir has never done a residency and Harvard has never housed Sanders Theater headliners in its dorms.

The choir received several standing ovations—and more than a few cat-calls—from the packed Sanders crowd for their Friday “musical celebration.”

Although the tickets were long since sold-out and many waited on standby, snow prevented the crowd from being as full as it might have been—but the show still attracted close to 900 visitors.

Harvard’s musicians—from the University Choir, the Baroque Chamber Orchestra, Kuumba Singers, and the Brattle Street Chamber Players—were equally enthused as they accompanied the choir in the classical, gospel and jazz program.

Boys Choir director Dr. Walter J. Turnbull conducted in a snazzy tuxedo with his whole body, smiling, swaying to the rhythm and mouthing the lyrics. The boys in their red blazers and bow-ties responded with perfect harmony and posture.

After an dramatic opening to the second act, Turnbull told the audience that he was grateful for the chance to visit.

“It’s about more than singing, it’s understanding how [the students] fit in the world and become good world citizens,” he said. “It doesn’t mean there aren’t any knuckleheads. They’re all adolescents.”

His speech stalled to allow the boys to complete a full costume change.

Having donned striped vests and bowler hats, they emerged for an energetically choreographed ragtime medley, complete with tap dancing and the classic 80s dance move, “The Robot.”

As the choir and Harvard groups took their final bows, Turnbull slowly smiled and mouthed “bravo.”

The choir members had longer, busier days than most Harvard students.

Finished with breakfast by 8 a.m., the choir reported immediately to classes. Their packed day of lectures and rehearsals kept them from the Houses until after rehearsal ended at 10 p.m.

On Wednesday, the boys went to Harvard’s ceramics studio, where they worked in groups to sculpt pieces inspired by their music. Each singer brought a different perspective based on the part he would sing.

Classes with Harvard’s top professors were the cornerstone of the visit.

Emmy-winning journalist Callie Crossley taught a class about political and social activism. She showed footage from the civil rights movement to her group and asked the boys to consider whether they would face danger to fight for equality.

“We had mixed opinions before, we wouldn’t fight because we weren’t brave enough,” eighth grade soprano Stephen M. Hill said.

But after seeing the films, Hill said more boys thought they would fight for education and desegregation.

A favorite of the choir, DuBois Professor of the Humanities Henry Louis “Skip” Gates lectured about his Encyclopedia Africana, which documents the entire history of Africa in detail.

“It took him 26 times get it started,” Darren P. Alexander, a junior bass in the choir, joked of Gates’ history. “He has determination.”

After using the prisoner’s dilemma as an example of group dynamics, Summers auctioned off a one dollar bill to show the benefits of cooperation.

He asked two Choir members to outbid each other on a one dollar bill. Each bid was a few cents higher than the previous bid. When the bidding stopped at $1.28, Summers explained that if the two competing students had cooperated and stopped raising the bid, then both parties would have made money.

“He told us about teamwork,” auction winner Alexander said. “If you put personal needs in front of the team’s, it won’t benefit you or the team.”

But beyond the classroom, the boys said they learned a lot about day-to-day interactions of Harvard students.

Hill said he was surprised by dorm life.

“It’s funny, people talk about college and classes,” he said. “They don’t mention dormitory life, but you have roommates and you have fun.”

“People get along that you wouldn’t expect, because now we’re all here for one purpose—to succeed and be the best,” he said. “These are the friends you keep for life.”

And choir members said they learned that being a college student would require maturity.

The choir, he said, teaches that kind of responsibility.

“When you have responsibility to the choir,” Alexander said. “You gain it inside of you and it keeps growing until it turns out into an adult.”

He compares Harvard professors to his mentor Turnbull.

“Dr. T. and Gates have the same determination, not only to want one thing, but to want that one thing to be the best no matter what,” Alexander said.

OFA officials said the visit not only gave the visitors a new perspective but offered Harvard something in return.

“I think we made history,” said OFA program manager Thomas Lee. “The group added a new level of excellence to this institution.”

“There’s a role for universities to play as patrons of the arts,” he said. “And Harvard played it beautifully. Dr. T to me is a hero for what he does.”