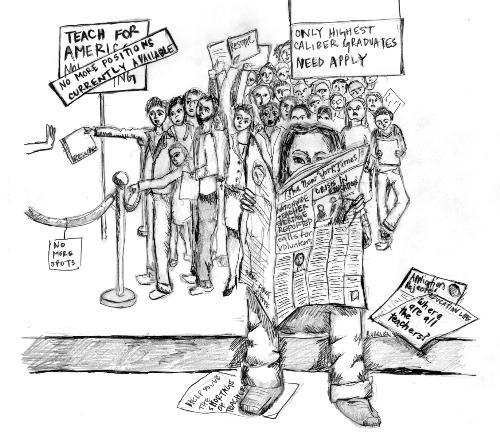 This past fall, a record 5,500 people applied to Teach For America (TFA), offering to spend the next two years of their lives teaching in public schools in low-income areas. Thousands more will apply by Feb. 21, the final deadline. These would-be teachers are mostly seniors or recent college graduates who want to give less fortunate students a better education. But if last year is any indication, 88 percent of those dedicated applicants will be rejected by TFA.

At the same time, the federal Department of Education says there is a “critical need” for teachers. Over the next 10 years, American school districts will try to hire 2.2 million new educators. While these positions are going unfilled, people who wanted to spend their first two years out of college teaching will instead be working on Wall Street or studying in law school.

Why doesn’t Teach For America hire more of its applicants to address this need?

“The goal of Teach For America is not to fill the teacher shortage,” writes TFA’s Director of Curriculum Development and former Crimson executive Andrew K. Mandel ’00. “It’s to recruit and train outstanding people who will work relentlessly for two years to narrow the achievement gap with their students and will become part of a movement of lifelong advocates for educational equity.”

That vision causes TFA to reject all but the most superlative applicants. Crystal Brakke, a recruitment director for TFA, says the low acceptance rate is due to the necessity of ensuring that those who are accepted can overcome great adversity. “Our admissions process must be extremely rigorous because in order to reach our vision of educational equity for all, we must recruit individuals with the leadership qualities and commitment necessary to be successful in the face of daunting challenges,” Brakke writes in an e-mail. “We ask our corps members to go above and beyond traditional expectations of teachers so that their students achieve at the same level as their peers in high-income areas.” In short, it appears that TFA’s main constraint to accepting more teachers is the quality of the applicants—not a lack of enthusiasm in other districts to join TFA and not a desire from already participating districts to limit TFA teacher numbers.

While new teachers in impoverished areas certainly face an extremely tough job, it is difficult to believe that only 12 percent of TFA’s applicants would be able to successfully teach when there is such a dramatic demand for educators. Judging from the qualifications and experience of two Harvard seniors who TFA turned down this past fall, it is easy to see the vast potential being squandered.

David C. Newman ’03, a former Crimson executive, directed one of Harvard’s volunteer tutoring programs for Cambridge high school students. He has been an SAT tutor since the fall of his first year. On top of that, he taught test-prep classes for the Princeton Review, working both with groups of students and one-on-one.

Shan P. Patel ’03, also a Crimson editor, taught three Kaplan SAT classes to minority students in Lowell, Mass. for over a year. He has volunteered his time for a veritable host of educational activities, from teaching civics in a Boston high school to ESL refugee tutoring to coaching volleyball and tutoring in a Cambridge middle school.

As a consequence of TFA’s narrow outlook—that only the very best should be accepted and sent to the most disadvantaged districts—thousands of other excellent applicants who want to teach for two years, like these seniors, are being spurned in spite of the massive need for teachers. There are no broad nationwide programs that seek to match all qualified recent college graduates with school districts starving for teachers; TFA is the closest thing, along with five cities that have very selective programs aimed at young and mid-career professionals. Those who are rejected could theoretically go through the arduous process of applying for individual job openings in different school districts hoping to land a position—extremely difficult without teaching certification, of course.

To its credit, Teach For America has been expanding dramatically as its applicant pool has skyrocketed. Last year, TFA increased its presence in existing districts by an average of 51 percent; it plans continued expansion in New York and two new areas this year. But it hasn’t managed to keep up with the demand. Teach For America Vice President of Site Development Aimee Eubanks says that “many of our districts always want more Teach for America teachers,” and there are several other districts and individual schools that have approached TFA over the last two years.

Considering TFA’s impressive expansion, it is understandable that there would be organizational hurdles to accepting, training, placing and supporting even more applicants while maintaining high standards. Brakke and Eubanks also pointed out other obstacles that have hindered TFA’s efforts to establish new sites—most notably a lack of alternative certification programs that permit teachers without educational backgrounds to enter the classroom. To facilitate TFA’s growth and maintain the quality of its programs as it expands, more federal funding is necessary, and of course states must ensure that their regulations allow TFA teachers.

If there were a national program with the broader goal of training qualified college graduates to teach in districts that need them, TFA’s mission of placing only the very best applicants in the most disadvantaged areas would be a superb complement to it. But as it is, TFA is pretty much the only way for seniors who do not plan to teach as a career, and who have no formal teaching credentials, to make an immediate impact in the classroom. There is a massive teacher shortage, and TFA cannot ignore the fact that almost every applicant it turns away means one less teacher in the districts that need them most.

Teach For America serves a noble purpose by recruiting the best educators to serve in the most deprived areas, but it must not hold itself hostage to a narrow vision that inhibits many more well-qualified applicants from making a difference.

David M. DeBartolo ’03 is a government concentrator in Lowell House. He was editorial chair of The Crimson in 2002.