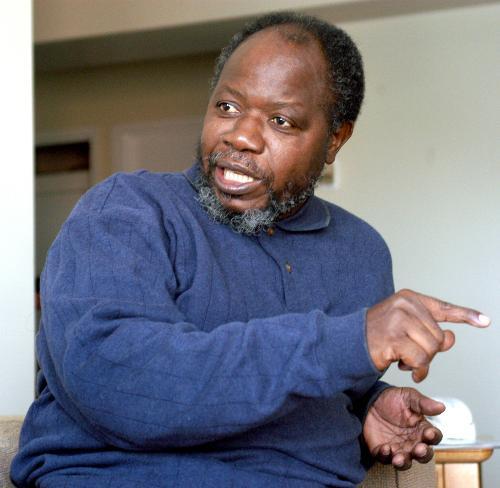 GEOFF NYAROTA joins the team of Nieman fellows after fleeing from Zimbabwe in December when his newspaper and home were attacked. returned to his abusive owners earlier this year.
By Irene Sanchez, CONTRIBUTING WRITER

The editor of Zimbabwe’s only independent newspaper, removed from his post and forced to flee his home country, has taken temporary refuge at Harvard this semester.

Geoff Nyarota, who left The Daily News and his homeland behind in December, recently received a last-minute fellowship from the Nieman Foundation on the recommendation of the Committee to Protect Journalists.

Nyarota, who came to Cambridge two weeks ago, said that the appointment from the Nieman foundation was a godsend for him.

“Coming to Harvard is an honor in itself,” Nyarota says, looking at the barren walls of his temporary home, a small apartment near the Quad. “But coming at this particular time, it is a blessing.”

The Zimbabwean journalist, who would not talk about his situation over the phone for fear that an interviewer was actually a spy from his government, spoke deliberately yesterday about numerous attacks on the newspaper he founded and the government harassment that drove him to flee to South Africa.

“The invitation to come to Harvard was extended when I was at my wit’s end about what to do,” Nyarota says. “I realized that Harare was not safe for me, and Johannesburg was only a temporary solution.”

The Committee to Protect Journalists recommends candidates to journalism institutes at three universities—Harvard, the University of Michigan and Stanford—that occasionally take in qualified journalists who are in danger, according to Nieman Foundation Curator Robert H. Giles.

After the Nieman Foundation received a call about Nyarota, they spent a few hours discussing the Zimbabwean writer before deciding to offer him a place.

“He has lived under a corrupt government, in a country that has been widely criticized by many nations for its oppressive regime,” Giles said. “Under these conditions he founded an independent paper, and kept it printing in the face of the strongest political opposition.”

Nyarota’s paper has had numerous conflicts with President Robert Mugabe’s government since its launch in 1999.

Nyarota launched the Daily News in 1999, with the goal of focusing on serious investigative journalism in a country where all the other media outlets were controlled by the government, he says.

During his tenure at the Daily News, Nyarota was arrested and taken into custody six times, he says, while running stories about human right abuses and corruption.

He received numerous death threats, he says, but he also won an award from Committee to Protect Journalists for his “courage to speak in a silence lands.”

In 2000, the Daily News’ headquarters were bombed, and in 2001, its printing press was bombed. For the past two years the paper was only able to print 70,000 copies a day.

“The government feels cornered, unpopular and relies on the true force of violence,” Nyarota says.

Nyarota said that the newspaper’s new chief executive—whom, he says, has direct ties to the government—dismissed him on December 30 without giving him any reasons.

The following day, the police searched the newspaper’s headquarters for Nyarota, that night, they searched his house just after midnight, he says.

After consulting with friends and coworkers, Nyarota says he decided to take the next available plane from Harare to Johannesburg. He fled with his wife, daughter and youngest son. His eldest son remains in Harare.

Nyarota was born and raised in Zimbabwe, and attended was then the University of Rhodesia. He received his B.A. in 1974 and went into teaching, the only field open to young black college-graduates in colonial Rhodesia.

When the “war for liberation” forced many rural schools to close in the mid-’70s, Nyarota switched careers and became one of the nation’s first black journalists.

For the past two decades, Nyarota has shuttled from paper to paper, writing expose stories and coming into frequent conflict with the country’s government.

While at Harvard, Nyarota says he hopes to gain some insight into “what goes wrong” in countries such as Zimbabwe.

He says this will prepare him for an even more meaningful involvement in the growth of the media in his country.

“Living through what I’ve lived through, one has to be an optimist,” Nyarota says. “It is my philosophy that what is happening in Zimbabwe today cannot be the destiny of my people. Change must come.”