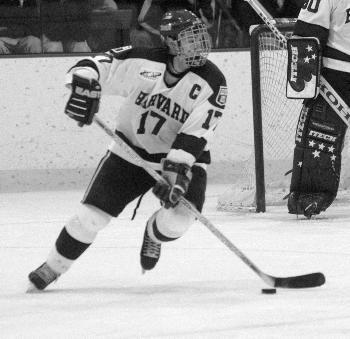 Captain and forward DOMINIC MOORE (17) notched two goals and two assists in the Harvard men’s hockey team’s roadtrip to Dartmouth and Vermont. The Crimson adjusted well to lineup changes due to the flu-like symptons that have plagued the team all week.
By Timothy M. Mcdonald, Special to the Crimson

Burlington, Vt.—Battling flu-like symptoms that sidelined major portions of the team for practices this week, the Harvard men’s hockey team showed its depth on its road trip against Dartmouth and Vermont as coach Mark Mazzoleni was forced to shuffle lines and replace injured players all weekend.

Against Dartmouth, junior defenseman Kenny Smith was still sidelined with a cold, so classmate Blair Barlow stepped into the lineup and provided a steady presence alongside junior Dave McCulloch.

“I thought Blair did what he was asked to do,” Mazzoleni said. “He was steady back there.”

Sophomore Andrew Lederman took his place last weekend and logged serious minutes. He was also in Bernakevitch’s spot for the game against Dartmouth. Junior Rob Fried and senior Aaron Kim took shifts as well, and no drop-off in play was observed.

The second line, no matter the combination, has remained Harvard’s hottest, responsible for four goals just this weekend.

“The guys that have been filling in for Bernie have really done a good job, so it really doesn’t matter who’s playing over there,” Cavanagh said, following Friday night’s win. “All the forwards on this team are working hard and playing good hockey, so everyone can play with everyone.”

Supporting Cavanagh’s contention, Mazzoleni had sophomore Rob Flynn play alongside Pettit and Cavanagh on Saturday. Although Flynn didn’t figure in the scoring, he brought a fast, physical presence, on one occasion nearly beheading a Catamount who was looking at his feet before Flynn had him on the ice, looking at the ceiling. Flynn also played almost all of his scheduled shifts, with Mazzoleni appreciating his fresh legs against the quick Vermont forwards.

“Rob Flynn played in the final three minutes [of the game against Vermont], the most crucial time,” Grumet-Morris said. “That speaks volumes about the confidence the coaching staff and the team has in him.”

The importance of the Crimson’s depth was seen throughout the weekend, but in particular late against Vermont.

With sophomore Ryan Lannon out of the game from nearly the first shift, and junior forward Tyler Kolarik leaving with a deep quadriceps bruise, Mazzoleni was forced to rotate five defensemen and shift his forward line combinations around, with all players absorbing extra ice time

“It’s nice when you’re not going to freshmen and sophomores [when there’s an injury], and you throw a junior or senior out there,” Mazzoleni said.

The two players Mazzoleni referred to are Fried and Kim, who brought their usual intensity—Mazzoleni has called the fourth line his ‘energy’ line—to the extra shifts late in Saturday’s game.

When the roster was still being juggled on a regular basis early in the season, Mazzoleni often talked about how the team finally had depth and that this development was going to have a big impact on the season.

Friday and Saturday, on the road against quick-skating opponents, Flynn, Barlow and Lederman proved Mazzoleni’s point.