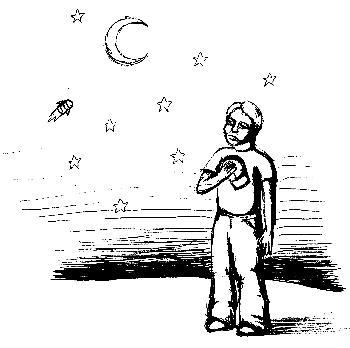 The breakup of the Space Shuttle Columbia came as a complete shock to America as we woke up on Saturday morning. Most of us had no idea that a shuttle had been aloft for the last 16 days. Israel’s attention had been fixed on themission; their first man in space was on board. But for Americans, this was just another routine shuttle flight; its takeoff and landing would get a passing mention on the evening news, nothing more.

Tragically, of course, we now know all the astronauts’ names: Michael Anderson, David Brown, Kalpana Chawla, Laurel Clark, Rick Husband, William McCool and Ilan Ramon. But even as we commemorate their sacrifice, we are not so sure why they died.

We see astronauts as explorers, sublime pioneers who push ever farther into dark and unexplored territory. We understood when Roger Chaffee, Gus Grissom and Ed White died in a fire on Apollo I’s launchpad; they were paving the way to the moon. But today, NASA’s job has become far less glamorous, even mundane; astronauts either deploy ultra-secret military satellites or deliver supplies to the international space station.

In the aftermath of this disaster, it was sad to see officials struggling to defend the existence of the space program. On television, one person pointed to the multitude of scientific and technical advances that have been byproducts of NASA research. And Columbia’s mission indeed focused exclusively on science—but measuring dust clouds and soot formation in space hardly captures America’s imagination, as worthy as those experiments may be.

America has a space program because we want to explore the last remaining frontier, and in order to do that, we need a clear and ambitious goal. President Kennedy provided one in 1961 when he declared that America would have a man on the moon by the end of the decade. It would be a fitting tribute to these brave men and women if President Bush declared that the U.S. would send a manned mission to Mars by 2015.

As President Reagan said after the Challenger exploded in 1986, “The future doesn’t belong to the fainthearted; it belongs to the brave.” In order to turn America’s eyes skyward once again, and in honor of these courageous astronauts, NASA should rededicate itself to a goal worthy of the sacrifice they made—to ascend the heavens and touch the soil of another planet, bearing all the hopes and dreams of mankind.