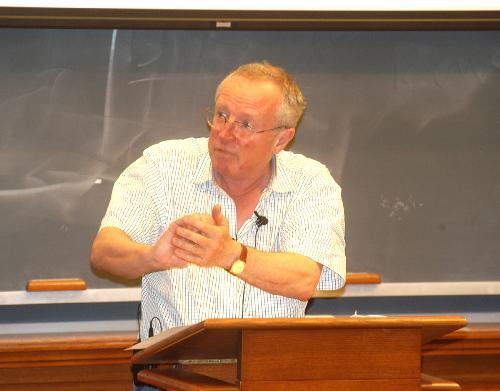 Journalist ROBERT FISK speaks at the Law School yesterday on the problems with the media’s coverage of Middle-Eastern affairs.
By Iliana Montauk, Crimson Staff Writer

Accusing journalists of misinforming their readers of the realities in the Middle East, award-winning British journalist Robert Fisk addressed a crowd of over 300 at Harvard Law School last night.

The journalist, who has spent over two decades covering the Middle East, argued that the media use terminology that distorts the truth and that many prominent news agencies avoid writing about facts that the United States government does not want the public to read.

According to Fisk, the media are reluctant to discuss civilian casualties caused by Western intervention in the Middle East. He cited as an example an epidemic of cancer caused by Depleted Uranium (D.U.) in Iraq after the 1991 Gulf War, a story that was not printed in most papers. DU is a material contained in weapons used by the U.S. military.

“The whole issue of D.U. has been deleted from our discussion today,” Fisk said. “As usual, we are prevented from knowing the truth.”

In an example of obscuring of facts, Fisk cited a memorandum that CNN sent to its correspondents instructing them to substitute the term “settlement” with the “cozier” term “neighborhood” in reference to a particular community in Israel.

The word “settlement” connotes Israeli imperialism in Palestine, Fisk said—a view that he suggested the American government would rather avoid.

Fisk said that the settlement referred to in the memorandum had been unlawfully constructed in an area inhabited primarily by Palestinians in violation of United Nations resolutions.

“Why on earth would anyone want to attack a neighborhood?” asked Fisk, arguing that such terminology has the effect of making Palestinian violence seem inexplicable.

When Fisk called CNN to ask for a comment on its use of this terminology, he said the the network declined to discuss the matter.

Fisk said that such reporting fails to inform the public and can be misleading.

He also suggested that American journalists follow the government’s international policy because they are not brave enough to challenge it.

Journalists who keep in mind that Israel is a U.S. ally, he argued, create biased reports.

Fisk affirmed that he does not support Saddam Hussein or Osama bin Laden and finds their actions absolutely objectionable. He stressed that the attacks on September 11, 2001 were tragic.

However, he said, “Without belittling the horror of that day, I do sometimes wonder if America’s concentration on that one day is dangerous self-absorption,” pointing out the greater number of civilian deaths in Middle Eastern countries that the American and European media rarely mention.

Fisk said that he foresaw attacks by Muslims on Americans and Europeans several years ago.

During his speech, Fisk stressed that “September 11 came from the Middle East, from a land that has been besieged and mistrusted” for years.

Fisk told the audience about a time when he was nearly beaten to death by locals when his car broke down in rural Afghanistan.

Explaining the motivations of the civilians, Fisk said that if he had been an Afghani, he also would have wanted to assault a European. Animosity arises from a history of self-interested Western intervention in Arab nations, Fiske said.

When asked by the audience about the United States’ reasons for attacking Iraq, Fisk said, “I think we want to invade Iraq because we want oil fields.”

He said that he does not believe that Iraq has nuclear weapons, mentioning that he thinks the United States avoids war with countries that have already acquired weapons of mass destruction, pointing to the situation in North Korea as an example.