Radical Economics: An Alternative to Ec 10 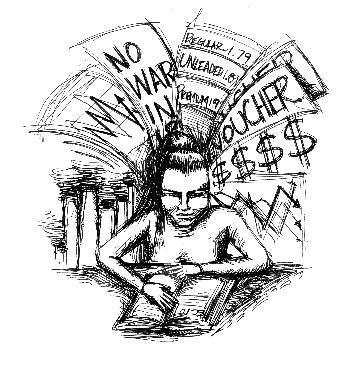 Rising gas prices from a war in Iraq. School vouchers. Environmental degradation and tradable pollution permits. Economic issues saturate today’s political debates and the front pages of newspapers. It should come as no surprise, then, that so many students—nearly half of the all undergraduates—have taken or are taking Ec 10. Formally “Social Analysis 10: Principles of Economics,” Ec 10 is the only exposure many students will have to economics and is the only Harvard College course which teaches introductory economics. But why should Ec 10, and Baker Professor of Economics Martin S. Feldstein ’61, have a monopoly on Harvard students’ understanding of this field?

It shouldn’t, and now there is an alternative. Barker Professor of Economics Stephen A. Marglin ’59 has proposed to teach a one-semester alternative that covers both mainstream economics and their critiques. Ec 10 is two semesters, the fall covering microeconomics and the spring, macroeconomics. While students in Marglin’s course would leave the class knowing as much about neoclassical microeconomics as those taking Ec 10, they would also be exposed to current debates between economists. Marglin will even use the same textbook as Feldstein. After the fall semester, students will rejoin Feldstein and Ec 10 in the spring.

Feldstein says that an introductory economics course should teach only the neoclassical economic model, and that if students are interested in the critique of that model, they should go on to take higher-level courses. However, many students never take higher-level courses, and if there is a broader view of economics within the field, why should students be denied the opportunity to study it in an introductory course?

Moreover, when Ec 10 does approach both the mainstream economic model and contemporary issues, it does so narrowly. When Ec 10 presents the mainstream economic model, it often glosses over the assumptions on which the model is founded. No economist will debate the fact that mainstream economics is based on a set of core assumptions, such as the belief that you are always better off with more and that people always work in their rational self-interest. Yet Ec 10 does not ask students to engage these beliefs critically. Marglin’s course would encourage students to examine these assumptions as a part of their introduction to the field.

When Ec 10 discusses economic policy issues, the scope of the debate is unambiguously provincial. A glance at the Readings and Workbook for Ec 10 is enough to explain why an alternative is necessary and appropriate. Feldstein’s articles dominate the readings, and of the other authors featured the vast majority support Feldstein’s point of view. So do the lecturers. The only lecture on education supports school vouchers, the only lecture on social security supports privatization. The problem is that while school vouchers and the privatization of government services are issues vigorously debated within the field of economics, they face no competition in Ec 10. The proposed alternative course would engage a variety of positions on the issues.

Historically, Ec 10 has not always been so one-sided. Before 1984, when Feldstein took over the course, there was a unit on Radical Economics, as well as alternative sections in which students could do additional readings which critiqued the dominant models they learned in class. However, Feldstein removed Radical Economics from the syllabus and eliminated the alternative sections. Perhaps in an ideal world, there would only be one introductory economics course including the mainstream models and its critiques, a course in which both conservatives and liberals would be challenged by opposing viewpoints. However, since Feldstein is unwilling to change Ec 10, it is clear that an alternative course is needed to serve the interests of the student body.

We come to Harvard to expand the borders of our knowledge and to learn how to think critically about the country and the world we must, upon graduation, serve. In the Courses of Instruction handbook, the goal of a social analysis course is described as one that will “enhance our understanding of contemporary human behavior.” Marglin’s course will accomplish this goal in a much more comprehensive way than Ec 10 does. Students across the College, and not just those involved with Ec 10, should support the establishment of this new course—and many do already. An online petition in support of Marglin’s course created by Students for Humane and Responsible Economics (SHARE) and accessible at www.harvardshare.org has over 500 signatures. Clearly, then, Marglin’s proposal for an alternative to Ec 10 is an issue of educational opportunity, and one that concerns the entire Harvard community.

Michael Y. Lee ’02-’03 and Jessica M. Marglin ’06, a first year in Dudley House, are members of SHARE. Kenyon S.M. Weaver ’03, a social studies concentrator in Pforzheimer House, was publisher of Fifteen Minutes in 2002.