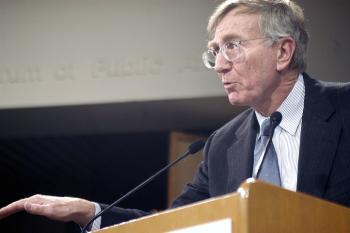 Journalist Seymour Hersh denounced the Bush administration’s approach to Iraq last night after accepting the Goldsmith Career Award for Excellence in Journalism at the Kennedy School of Government’s ARCO Forum.

About 250 people attended the event, at which eight journalists from the Boston Globe won the Goldsmith Prize for Investigative Reporting for their work on the sexual abuse scandal in the Catholic Church.

Hersh began his acceptance speech by portraying the difficulties that today’s reporters face, especially in Washington.

“I have never seen my peers as frightened as they are now,” Hersh said.

Hersh spoke of his own frustration with the Bush administrations both as a reporter and as a citizen.

“There is no real standard of integrity because the White House doesn’t have any,” he said.

“It’s scary. I wish I could say something optimistic. I think this guy will do what he wants to do,” Hersh said.

“Ashcroft seems to be confusing his personal definition of God with the Constitution,” Hersh said. “He’s the least knowledgeable and most dangerous attorney general we’ve had.”

Hersh then turned his attention to the impending war with Iraq.

Hersh said skepticism about a potential war is shared by many Washington insiders.

“I have never seen such dissent even with three and four star generals. The war is particularly not popular with the marines,” Hersh said.

“Congress has gotten so much dumber it’s embarrassing,” he said. “There has been a collapse of Congress. It’s an incredible failure. A staggering failure.”

Hersh rose to prominence in journalism after his 1969 reporting on the My Lai massacre, for which he won the Pulitzer Prize.

Also last night, Doris A. Graber was awarded a Goldsmith Book Prize for her book Processing Politics: Learning from Television in the Internet Age.

Leonard Downie Jr. and Robert G. Kaiser won a Goldsmith Book Prize for The News about the News: American Journalism in Peril.