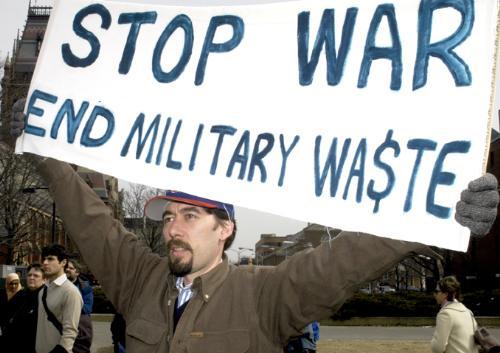 About 350 students, faculty and local residents attended the 12:30 p.m. “Emergency Anti-War Rally”, which was organized by the Harvard Initiative for Peace and Justice (HIPJ) and co-sponsored by six other student organizations.

“We refuse to be silent as the tides of war face our country,” said HIPJ member Jesse Stellato ’05, the event’s opening speaker. “We’re here today because we are aware that as a result of this war many of our friends, family, colleagues...will not come back alive.”

The rally also featured a folk singer as well as speeches by local anti-war organizers, Harvard students and faculty members involved with the recently-formed Faculty Initiative for Peace and Justice, including History of Science Professor Everett I. Mendelsohn.

“I’m impressed by the fact that silence is no longer here at Harvard,” Mendelsohn said, drawing cheers with his statement that “President Bush’s war is ill-advised, ill-timed and illegal.”

Peter P. Buttigieg ’04, a board member of the Harvard College Democrats—who issued a statement opposing the war on Monday—spoke about what he called President George W. Bush’s “selective memory.”

He asked the crowd to look at Memorial Church and Memorial Hall.

“They remind us of a time when we had to take up arms against another nation, and there may be a day we have to again, but that day isn’t today,” Buttigieg said.

About a half dozen Harvard Facilities Maintenance Operations workers stood apart from the crowd during the rally waving American flags.

“We’re here to support the troops,” said John W. Carbone, one of the workers. “There was no support for troops back in Vietnam, although it’s better this time.”

“Also, we really do think terrorist organizations do have ties to Iraq. The evidence is out there,” added Carbone, who said his sister almost took American Airlines Flight 11, which crashed into the north tower of the World Trade Center on Sept. 11.

Organizers said that the rally was a way to show solidarity with university students across the nation who held similar events last week.

“Thousands of students walked out on March 5th, and things are really picking up now as it seems we’re getting closer and closer to war,” said HIPJ member Daniel DiMaggio ’04.

HIPJ members said that building support for the anti-war cause in recent months has led to increased interest in their group.

“We’re getting a huge response,” said HIPJ member Paul G. Dexter ’04, who said that yesterday’s rally was larger than a similar event held in October.

And with some students missing class to attend yesterday’s event, the rally might also serve as a gauge for the HIPJ-organized walkout scheduled for the first weekday after the war begins.

So far more than 800 students and faculty have signed an online pledge to walk out of class on that day.

“To be honest, I do feel like most students have made up their minds [about the war],” said Jessica L. Diaz ’05, vice president of the College Democrats, “but this rally will help to mobilize those who are already opposed.”

“I thought I’d learn more about moral reasoning from this than from class,” said Sophie L. Gonick ’05, who skipped out on Moral Reasoning 54, ‘“If There is No God, All is Permitted’: Theism and Moral Reasoning.”

Some students said they felt that while the war may already be a foregone conclusion, the rally was still useful.

“We’re going to war no matter what,” Scott F. Goldman ’04 said. “But that’s even more reason to come to these things and ask important questions.”

He said students deserved to have their questions about the war answered by the Bush administration.

“Why Iraq? Why now? And where is bin Laden? There are bigger fish to fry but we are being dragged into this war,” Goldman said.

The crowd dispersed at about 1:45 p.m. and was encouraged by HIPJ to move on to Harvard Square to distribute information and to participate in a protest along Mass. Ave. this Saturday at 10 a.m.

—Staff writer Margaretta E. Homsey can be reached at homsey@fas.harvard.edu.