In Spite of Injuries, Women's Tennis Still Glides Past BC 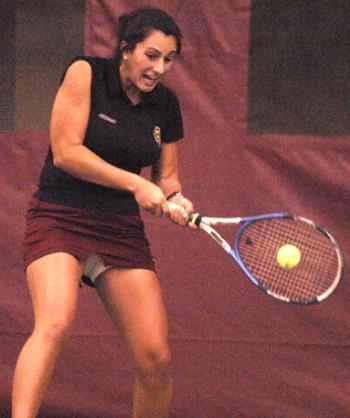 Sophomore ALEXIS MARTIRE won both her doubles and singles matches as the No. 26 Harvard women’s tennis team beat Boston College 5-2 at the Murr Center on Saturday.
By Sean W. Coughlin, Crimson Staff Writer

Despite playing without two of its top four seeds, the No. 26 Harvard women’s tennis team cruised to a 5-2 victory over crosstown rival Boston College Saturday at the Murr Center.

“We all went into the match mentally prepared for a battle because we knew it was going to be a tough match without [sophomore] Courtney [Bergman] and [freshman] Eva [Wang],” captain Sanja Bajin said.

The Crimson (7-2) used two new doubles combinations, yet still swept the double matches. Sophomores Susanna Lingman and Ashley Hyotte were paired together for the first time, as were freshmen Alli Pillinger and Melissa Anderson.

The veteran duo of Bajin and sophomore Alexis Martire got things rolling for Harvard with a decisive win at No. 1 doubles.

The newly formed pairs took a bit longer to find their chemistry, but both teams got it together to give Harvard the sweep.

In singles action, Lingman stepped up into the top spot vacated by Bergman and made quick work of Szilvia Szegedi, 6-2, 6-1 in a battle of hard-hitting baseliners.

At No. 3, Bajin played a gritty match against BC’s Allison Ashley. After falling behind 5-3 in the first set, the senior clawed back with some inspired tennis to win a first-set tiebreak. Bajin then made quick work of her opponent in the second set to win 7-6, 6-0.

In only her third start of the year, an inexperienced Pillinger prevailed in a tough first set at No. 6 singles, 6-4. With her opponent visibly tired after the fast-paced set, Pillinger used her quickness to claim an easy second set, 6-1 for her first win of the season.

Just minutes later, No. 2 Martire iced the victory for the Crimson with a 7-5, 6-3 win which put Harvard up by five points.

The only Crimson losses on the day came in nearly identical three-set matches at the No. 4 and No. 5 positions. Anderson and Hyotte, playing simultaneously on adjacent courts, couldn’t keep the momentum against their Eagles opponents and fell at the same moment.

“This weekend’s match was a great showing, not only because of our win but also in that we proved how committed, supportive and motivated the team is heading into tougher competition,” Pillinger said.

Harvard’s next action comes against No. 57 Oklahoma State—a squad comprised entirely of international players and featuring one of the nation’s top ten doubles teams—on Wednesday at 2 p.m. at the Murr Center.

—Staff writer Sean W. Coughlin can be reached at coughl@fas.harvard.edu.